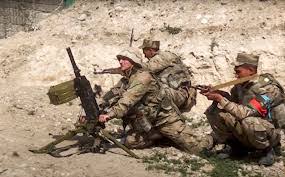 October 03, (KINS): The Azerbaijani army has lost more than 3,000 servicemen since the eruption of hostilities in conflict-torn Nagorno-Karabakh, the press secretary of the president of the self-proclaimed Republic of Artsakh said on Saturday.

“The intelligence data show that the Azerbaijani losses had already exceeded 3,000 servicemen. Most bodies remain in the neutral zone, and nothing is being done for their transportation,” Vagram Pogosyan wrote on his Facebook page.

On Sunday morning, an escalation unfolded along the contact line of Nagorno-Karabakh, an Armenian-majority autonomy that proclaimed independence from what then was the Soviet Azerbaijan Republic in 1991.

Azerbaijan launched what it described as a “counteroffensive,” while the Artsakh authorities accused Azerbaijani forces of opening fire against civilians and civilian infrastructure in its capital of Stepanakert.
The armed hostilities continue at this point. (ANI)