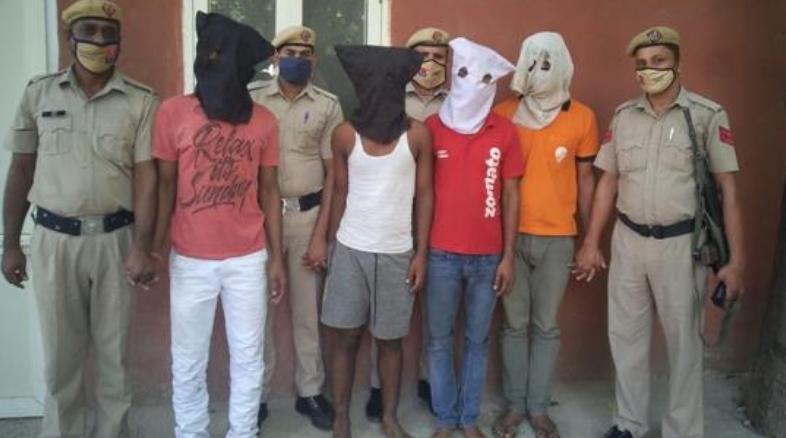 Four men allegedly gang-raped a 25-year-old woman and thrashed her brutally when she resisted in Gurugram’s DLF Phase-2 on Saturday night.

Gurugram police, after they were informed of the incident by a security guard, rushed the victim to a hospital and arrested all four accused from different parts of Gurugram in a night-long raid.

The accused had smashed the woman’s head.

The accused, identified as Ranjan, Pawan, Pankaj and Gobind, all live in Chakkarpur area. Pawan is an office boy and all the others are delivery boys with Zomato and Swiggy.

According to sources, the victim was allegedly picked up by Pawan from the Sikanderpur metro station for paid sex with two men around 1:30 am. He walked her to the property dealer’s office in DLF phase-2 where he worked. The other three accused were already waiting there and they asked her to have sex with all of them. She refused and tried to flee. The men then brutally thrashed and gang-raped her. Her head was smashed against the wall, following which the accused fled the spot.

“We got a call from a security guard around 1:30 about a woman with a bleeding head, in a dishevelled state, stumbling out of an office. We immediately reached the spot and rushed her to a hospital. The victim, in her complaint, claimed that she was forced to have sex the four accused, even though she had she said no.

We immediately deputed special raiding parties and managed to nab the accused within two hours from different parts of the city while they were trying to flee. They are currently being interrogated,” said ACP Karan Goel.

The incident has rattled the entire city and women activists have demanded quick and stringent punishment for the accused.

“Thankfully, Gurugram police acted swiftly but we want exemplary punishment for the accused to ensure they understand that a no means no. We have moved to CP regarding same,” said Ranjana Saxena, a women’s rights activist.(Tribune)