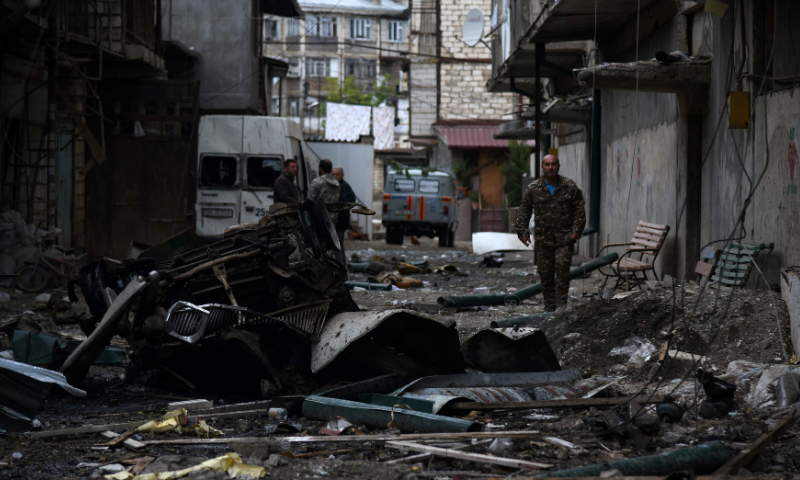 OCTOBER 05: Clashes between Armenian and Azerbaijani forces were raging over the disputed Nagorno-Karabakh region on Monday as fears grew for civilians after the two sides shelled major cities.

Separatist forces in Karabakh — an ethnic Armenian enclave that broke away from Azerbaijan in the 1990s — reported firefights along the frontline with the regional capital Stepanakert under heavy artillery fire.

Increasing artillery fire on urban areas has raised concerns of mass civilian casualties if the fierce fighting, which has already killed more than 240 people, continues to escalate.

The clashes broke out on September 27, re-igniting a decades-old conflict between the ex-Soviet neighbours over Karabakh and threatening to draw in regional powers like Russia and Turkey.

Neither side has shown any sign of backing down, ignoring international calls for a ceasefire and a return to long-stalled negotiations on the region.

Stepanakert, a city of some 50,000 in the heart of the mountainous region, has been under steady artillery fire since Friday, with residents cramming in to underground shelters and many leaving.

The separatists’ foreign ministry said Monday that shelling of Stepanakert had resumed at 6:30am (0230 GMT), with four shells hitting the city.

It released video footage of repeated bursts of heavy shelling and of debris from seriously damaged blocks of flats, claiming Azerbaijan had used cluster munitions.

Azerbaijan said Armenian forces were shelling the towns of Beylagan, Barda, and Terter.

The two sides have reported 244 deaths since the fighting erupted, including 42 civilians, but the real total is expected to be much higher as both sides are claiming to have inflicted heavy military casualties.

The International Committee of the Red Cross on Sunday condemned the reports of “indiscriminate shelling and other alleged unlawful attacks using explosive weaponry in cities, towns and other populated areas”.

Azerbaijan said on Sunday that two civilians had been killed in shelling on the southern town of Beylagan, where a journalist working with AFP saw residents picking through the rubble of destroyed homes.

Each side accused the other of targeting civilian areas.

In a fiery address to the nation on Sunday, Azerbaijani President Aliyev set conditions for a halt to the fighting that would be near impossible for Armenia to accept.

He said Armenian forces “must leave our territories, not in words but in deeds”, provide a timetable for a full withdrawal, apologise to the Azerbaijani people and recognise the territorial integrity of Azerbaijan. Yerevan rejected Aliyev’s demands.

Russia, the United States and France — co-chairs of a mediation group that has failed to find a political resolution to the conflict — have called for an immediate halt to the fighting.

Russian Foreign Minister Sergei Lavrov expressed concern over “the increase of casualties” among civilians in a call with his Armenian counterpart on Sunday.

Karabakh’s declaration of independence from Azerbaijan during the collapse of the Soviet Union sparked a war in the early 1990s that claimed 30,000 lives.

Talks to resolve the conflict have made little progress since a 1994 ceasefire agreement.

COVID-19 vaccine could be ready in a year: European Medicines Agency

Will always speak up for Kashmiris living on both sides of LoC, says British MP

Kashmir is a cornerstone of Pakistan`s foreign policy: Qureshi