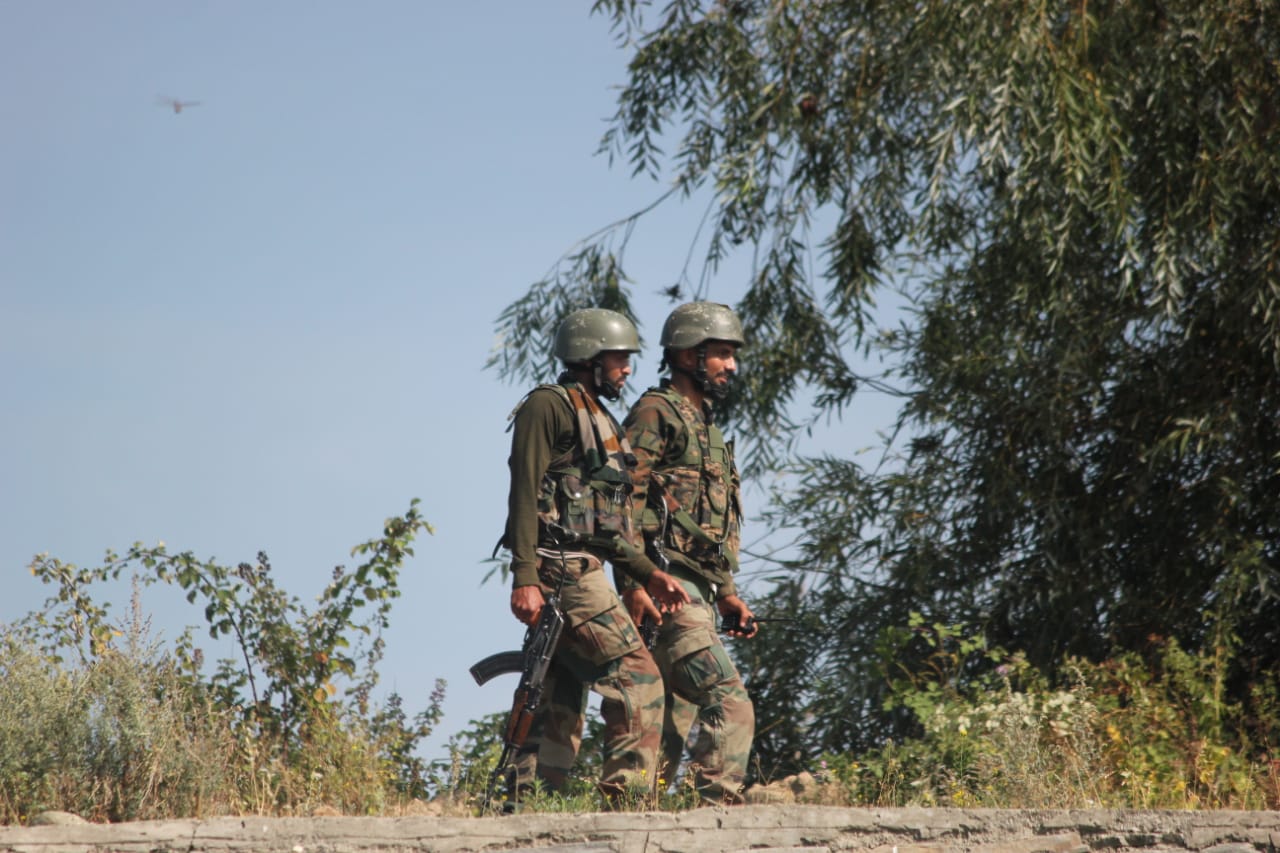 KINS Desk
Srinagar Nov 06 (KINS): Two militants were killed in a gunfight with security forces while third militant surrendered in Lalpora Chatlam area of Pampore, Awantipora says police.
A police spokesperson in a statement to news agency Kashmir Indepth News Service (KINS) says that on a specific input regarding presence of militants in Lalpora Chatlam area of Pampore, Awantipora, a joint cordon and search operation was launched yesterday evening by Awantipora Police,  50RR and 110Bn CRPF in the said area.
“During the search operation, the hiding militants fired indiscriminately, resulting in injuries to two civilians and managed to escape from the hiding spot. In the first instance, both the injured civilians were immediately rescued and shifted to hospital for the treatment. However, one of the injured identified as Abid Ahmad Mir son of Abdul Hamid Mir resident of Meej Pampore succumbed to his injuries, while as the condition of other injured is stated to be stable,” the statement said.
The statement said that joint team of Police and SFs again tracked the militants and as the presence of militants got ascertained, they were given opportunity to surrender. “However, they again fired indiscriminately upon the joint search party, which was retaliated leading to an encounter,” the statement said.
“Due to darkness, the operation was suspended and whole area was put under strict cordon. In the wee hours, operation was resumed and in the ensuing encounter one of the trapped militant was killed. However, the opportunity to surrender was yet again offered to the other trapped militants, as a result of which one of the trapped militants of LeT outfit laid down his arms/ ammunition and surrendered in an injured condition before the Joint Forces during the live encounter and was subsequently shifted to hospital.”
The statement says that operation however continued and the third militant got killed in the afternoon. “The bodies of both the killed militants were retrieved from the site of encounter, who as per reliable sources are Pakistani nationals. The militant who surrendered has been identified as Khawar Sultan Mir son of Mohammad Sultan Mir resident of Drangbal Pampore. All the three terrorists were affiliated with proscribed terror outfit LeT,” it says.
IGP Kashmir Vijay Kumar has yet again congratulated the joint team of police and SFs for showing utmost patience and exhibiting professionalism, which resulted in saving the life of a local misguided youth. IGP Kashmir further added that the local misguided youth are always welcomed to return to mainstream. “This year has been successful as many of them are returning and has reiterated his appeal to them to shun the path of violence,” the statement reads.
“Incriminating materials including arms & ammunition recovered from the site of encounter have been taken into case records for further investigation and to probe their complicity in other crimes. In this connection a case under relevant sections of law has been registered and investigation has been initiated. People are requested to cooperate with police till the area is completely sanitized and cleared of all the explosive materials, if any,” it added. (KINS)

Appointment of VC for CUS, Not calling KU professors for interaction injustice, biased approach: Tarigami

Parties free to engage in political activity in J&K, there is no proscription: L-G Manoj Sinha