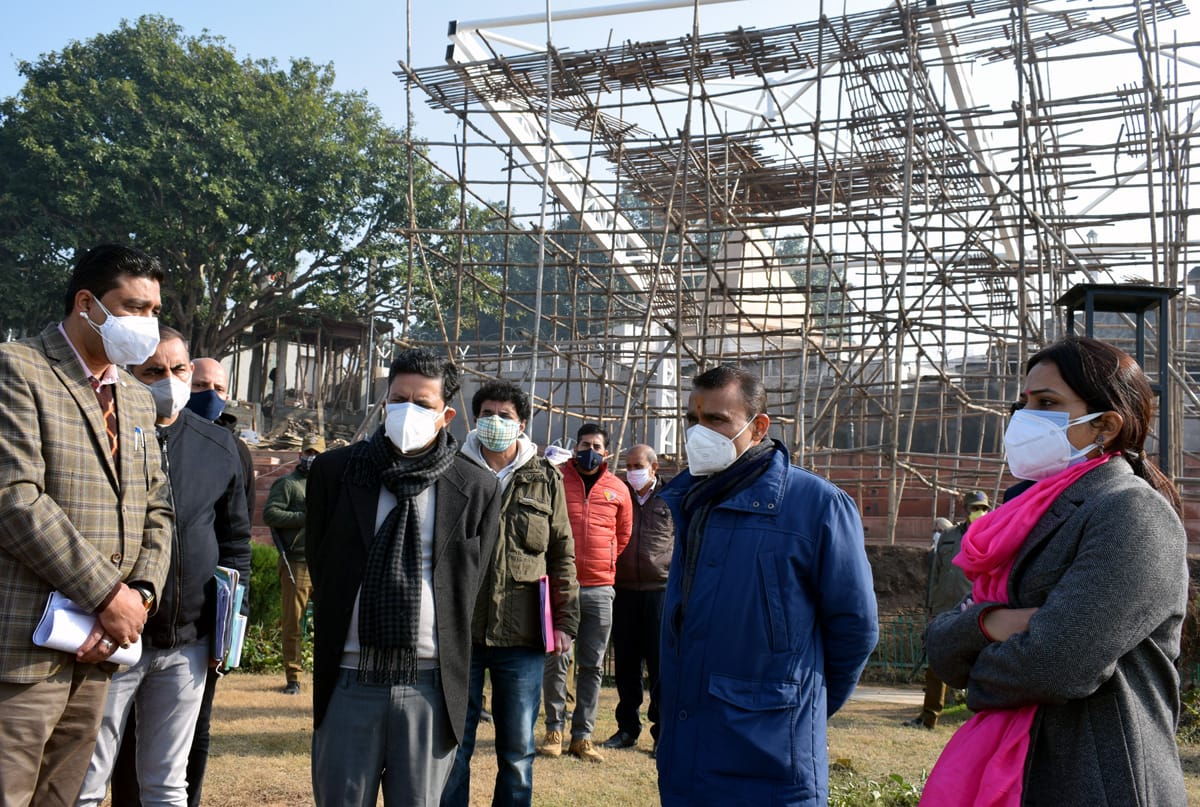 Jammu, December 18: Principal Secretary to the Lieutenant Governor, Sh. Nitishwar Kumar conducted a whirlwind tour of Jammu city in which he inspected various prestigious projects being undertaken by Jammu Smart City Ltd.
Divisional Commissioner Jammu, Sh. Sanjeev Verma and Deputy Commissioner Jammu, Ms. Sushma Chauhan who is also the CEO, Jammu Smart City Ltd. accompanied the Principal Secretary.
The Principal Secretary inspected the ongoing works of Jambu Zoo, Musical Fountain and Amphitheatre at Bagh-e-Bahu, Cycle Track and Green spaces project along Tawi River.
While visiting the ongoing projects at Jambu Zoo with the cost of Rs. 62.41 Cr., the Principal Secretary inspected the animal enclosures and aviaries which are being constructed in the Zoo. It was informed that the aviaries shall be the largest of its kind in the entire country.
The Principal Secretary directed Chief Wildlife Warden, Sh. Suresh Gupta to plan the completion of project in a phased manner so that it is open for public ahead of its schedule. He also directed to vigorously pursue the clearances which are pending with the Central Zoo Authority for approval.
The Principal Secretary then visited the proposed site for the construction of Cycle track and Green spaces project along the Tawi River Bank to be executed by Jammu Smart City Ltd.
He stressed to identify suitable places as vending zones and create Green spaces along the proposed cycle track. He further directed to integrate the project with River Front Development Initiative so that it comes out as one of the best amongst the River Front Development projects being undertaken anywhere else in the country.
Later, the Principal Secretary inspected the ongoing Musical Water Fountain’s Light and Sound Project being executed by Tourism Department and Amphitheatre construction, undertaken by Floriculture Department at Bagh-e-Bahu.
He directed the Tourism Department to prepare operational estimates of the project and devise a suitable revenue mechanism that can be put in place when the project is commissioned in future. He also directed the Floriculture department to ensure that adequate lighting and illumination as per the standard norms is put in place at the Amphitheatre. He directed Divisional Commissioner Jammu, to ensure the development of the road leading to Amphitheatre before commissioning of the project.
Director Tourism Sh. R.K Katoch; Director Floriculture Sh. K.S Chib, and Addl. Deputy Commissioner, Jammu Sh. Satish Kumar Sharma were also present.

DDC Elections- 8th Phase8.93% votes polled till 9AM across J&K