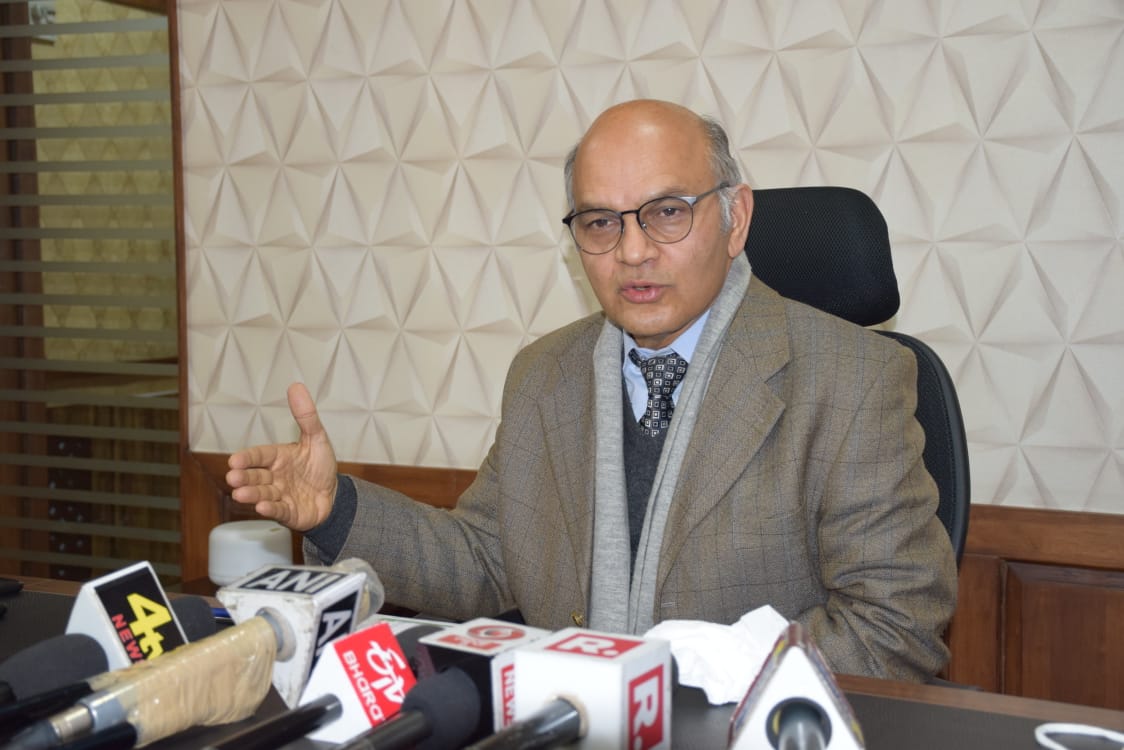 SRINAGAR, DECEMBER 19: The State Election Commissioner (SEC), K K Sharma on Saturday said that nearly 51 per cent voting was recorded in the final phase of District Development Council (DDC) elections held today across Jammu and Kashmir.
Addressing a press conference here, the SEC said that polling was peaceful in the poll going 28 constituencies of DDC including 13 in Kashmir division and 15 in Jammu division that witnessed 50.98 per cent of polling.
The SEC informed that polling was held in 1703 polling stations including 1028 from Kashmir division and 675 from Jammu division.
SEC further informed that Jammu division recorded an average voter turnout of 72.71% with Poonch district recording the highest percentage of 83.58% followed by Reasi district with 81.92% and Rajouri with 77.31%.
The Kashmir Division recorded 29.91% average voter turnout with Kupwara district recording the highest polling at 63.80% followed by Bandipora with 56.56% and Baramulla district recorded 44.60% polling, he added.
Giving district wise details, the SEC informed that in Kashmir Division the polling percentage recorded in Budgam was 35.12%, Anantnag 8.66%, Kulgam 11.20%, Pulwama 8.50% and 8.58%polling was registered in Shopian.
Similarly, in Jammu division poll percentage of 73.65% was recorded in Samba, 73.93% in Kathua, 73.42% in Ramban, 73.45% per cent in Kishtwar, 60.49% in Udhampur, 70.33% in Doda and 69.39% in Jammu district.
The SEC said that the elections were held to 280 DDC constituencies for the first time in Jammu and Kashmir. It is very promising to note that a very good participation of people was observed and enthusiasm among the people could be found on its peak keeping in view the fact that these elections are going to have on the developmental scenario in the rural community.
Besides these, 1088 Panchayat Halwas and 12153 Panch constituencies went to elections.
He further said that 321694 (169271 male and 152423 female votes) people exercised their right to franchise for the final phase across the Jammu and Kashmir Union Territory.
Also, the SEC informed that re-polling was ordered after contesting candidates from several political parties, other candidates and voters complained about unlawful activities during polling at some polling stations of Mendhar and Shopian DDC Constituencies. Besides, attempt to create ruckus at some polling stations.
Giving further details, the SEC informed that the re-polling has been done at four polling stations of Poshana (Bufliaz DDC constituency) today.
He said that the same would be done in two polling stations of 17-PS Hajama and 32-MS Gallian (Mendhar-A DDC constituency), two polling stations of 29-Sakhimaidan & 30-GMS Sakhimaidan (Mendhar-B DDC Constituency) besides at two polling stations of Balpora (DDC Constituency Shopian-II) on 21st December.
He further added that the poll timing would be 7 am to 2 pm whereas the counting shall be done on December 22, 2020 along with the rest of the DDC constituencies as per the schedule notified by the Election Authority.
The SEC further expressed thanks to Administration, Health department, Security forces, J&K Police, Political Parties, contesting candidates and Media for helping to conduct peaceful, transparent, free and fair elections.
He said that the Administration has played a pivotal role in making the elections a success as they have actually made it happen. In Kashmir the government officials have braved the chilling cold to ensure that democratic process comes out successful.
While appreciating the role of Health department, the SEC said that department has made foolproof arrangements for implementing the Covid guidelines in and outside the polling stations.
He said that the people of Jammu and Kashmir overwhelmingly participated in the election process thus reposing their faith in democracy and democratic process.
Further, he said that counting of votes for Sarpanch and Panch constituencies which went to poll in the eighth phase is being conducted.