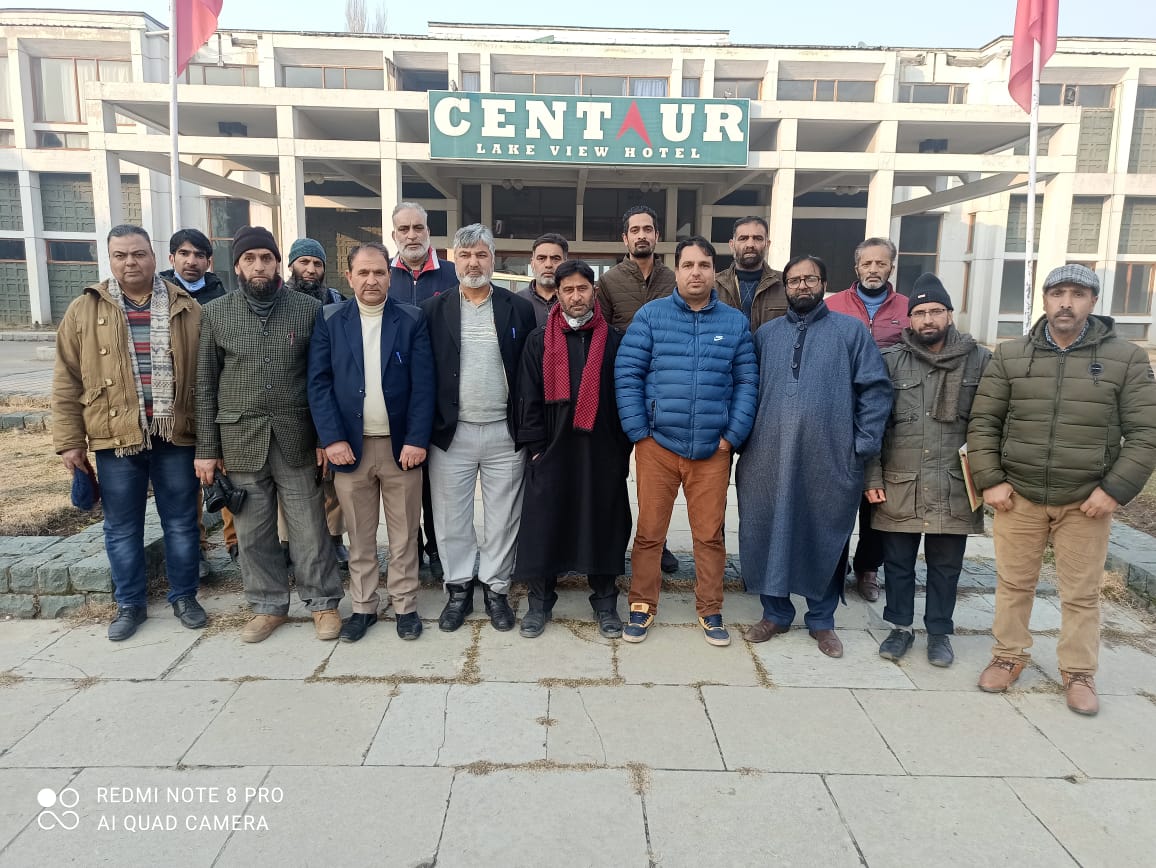 Ishtiyaq Ahmad
Srinagar Dec 24 (KINS): Employees Joint Action Committee (EJAC) has urged the government to resolve the already conceded issues and demands of employees.
An extra ordinary daylong session of Employees’ Joint Action Committee (EJAC) was held under the chairmanship of its President Fayaz Ahmad Shabnam at the office of Centaur Employees union at Hotel Centaur. The session was hosted by the president Centaur Employees union Peer Mohammad Ismail Shah. All the heads of affiliated units participated in the session along with district presidents of different districts.
The leaders have urged upon the Govt to resolve the already conceded issues of the employees at an earliest.
“As the model code of conduct is over the government must come up with a comprehensive redressal of the issues of the employees working in different departments. The session urged the government to regularise the temporary employees of all the departments as this issue is lingering since long and the pending salaries/ wages should be released at the earliest. The patience of employees should not be treated as weakness of the employees. EJAC cautioned the government not to adopt delay delaying tactics anymore,” a spokesperson of the EJAC told news agency Kashmir Indepth News Service (KINS).
The session demanded that Minimum Wages Act be implemented in letter and spirit so that temporary employees could heave a sigh of relief. The EJAC asked the departmental heads to hold D P C meetings in their respective departments so that the employees are benefitted.
EJAC President Fayaz Ahmad Shabnam while addressing the session said that the struggle shall continue till all the issues of employees are resolved.
Shabnam stressed on the unity of employees and said this is the largest bonafide representative organization of the employees.
“We are committed to represent the employment with sincerity and dedicated,” he told news agency KINS.
The leaders assured the President that EJAC is strong enough to work for the honour & dignity of the employees. The EJAC criticized the role of vested interest people who are harming the cause of employees for furthering the agenda of their sponsors. The session advised such elements to desist from such activities which hamper the cause of employees. All the participating leaders expressed the satisfaction for the successful conduct of the session & thanked the host and the leaders.
Shabnam urged upon all the organizational heads to manage a close liaison with ground level activists of EJAC so that this platform may reach more heights and the employee can be served with strong voice.
The leaders who made a speech during this meeting included Dr Manzoor, Abdul Rashid Sambori, Mohammad Altaf Handoo,Mohammad Akbar Khan, Muzafar Ahmad Ganie, Molvi Bashir Ahmad, Mir Fayaz, Javaid Ahmad Bhat, Farooq Ahmad Lasjani, Suhaib Munshi, Abdul Rashid Saaloora, Faheem Jan Zargar ,Mansoor Ahmad Bhat, Rouf Ahmad Shah, Fayaz Ahmad Bhat, Haji Showkat, Lateef Ahmad Bhat and others. (KINS)