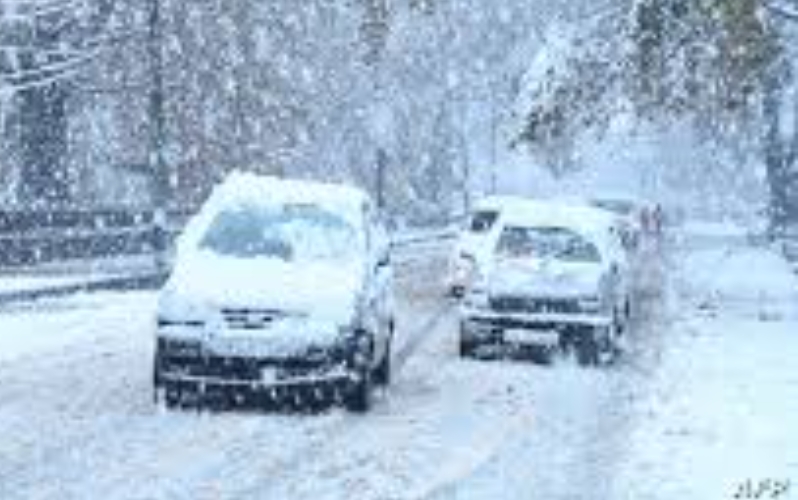 Srinagar, Dec 28 (KINS): Parts of Jammu region received a fresh snowfall overnight, leading to the temporary closure of Jammu-Srinagar national highway.
As per the last reports, NHW was open for traffic movement after clearance of landslide and accumulated snowfall.
Reports of fresh snowfall were received from Banihal, Jawahar Tunnel, Mata Vaishno Devi, Marwah, Warwan, Machail, Kishtwar, Patnitop and other higher reaches.
Snow depth ranging from 1 inch to 6 inches was reported at these places.
Light snowfall also occured at few parts of Kashmir including Pahalgam, Gulmarg, Gurez and Sonamarg.
Meanwhile, temperature stayed above freezing point in parts of the valley after a period of 14 days.
Srinagar city recorded the low of 0.6 degrees Celsius – improvement of almost 6 degrees from minus 5.2 degrees Celsius the previous night.
The ski-resort of Gulmarg in north Kashmir was the coldest place in the valley with a low of minus 6.5 degrees Celsius last night. The night temperature at Pahalgam resort, which also serves as one of the base camps for the annual Amarnath yatra in south Kashmir, settled at a low of minus 1.3 degrees Celsius – up from minus 5.9 degrees Celsius yesterday.
Qazigund – the gateway town to the valley – in south Kashmir recorded a low of minus 0.3 degrees Celsius – higher than the previous night’s minus 5.0 degrees Celsius. Kokernag town, also in the south, recorded a low of minus 1.5 degrees Celsius, while Kupwara, in north, registered the minimum of minus 0.5 degrees Celsius.
Jammu city recorded 6.4 degrees Celsius, Katra 4.0, Batote minus 1.7, Banihal minus 0.2 and Bhaderwah minus 0.2 as the night’s lowest temperatures.
Leh town, in the Ladakh Union territory, recorded a low of minus 8.2 degrees Celsius – up from the previous night’s minus 12.9 degrees Celsius. The mercury in the nearby Drass town settled at a low of minus 14.2 degrees Celsius – 8.5 degrees up from minus 22.7 degrees Celsius on Sunday.
Disaster Management Authority of Jammu and Kashmir government on Sunday issued a ‘low level (yellow alert) avalanche warning’ for upper reaches of Poonch, Ramban, Doda, Kishtwar, Anantnag, Kulgam, Baramulla, Kupwara, Bandipora, Ganderbal and Kargil districts.
Kashmir Weather, an independent weather forecaster, has forecast mainly dry weather till 4 January.
“There were reports of snowfall in parts of Jammu region while light snowfall also occurred at a few places in Kashmir. This was due to a Western Disturbance which is still passing over Jammu and Kashmir. The weather system is likely to move away from the region in the next 24hrs and dry and cold weather is expected till 4th January afterwards. Cold wave conditions may return in the coming days,” he said.(KINS)