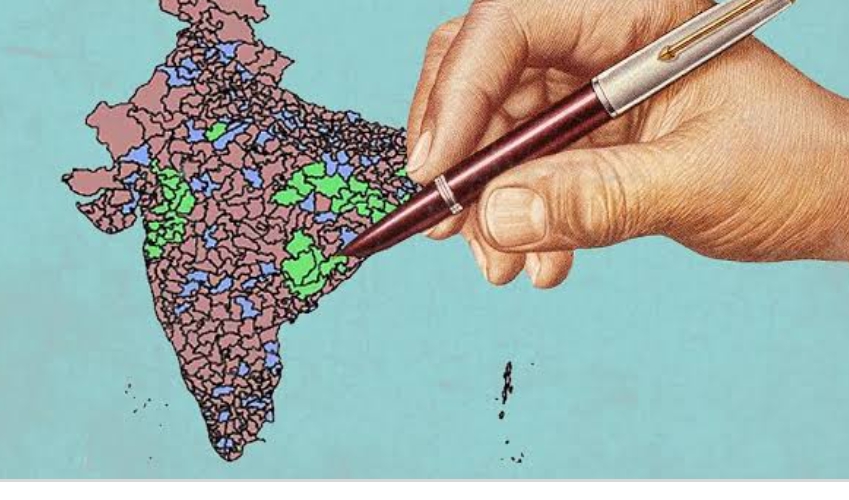 Ishtiyaq Ahmad
Srinagar, Dec 28 (KINS): The Delimitation Commission operating from its New Delhi office has gathered vital data pertaining to total electorates in Jammu and Kashmir and is most likely to visit Union territory in February- March, KINS has learnt.
The Commission constituted to ‘redraw’ J&K’s Assembly hasn’t visited Jammu and Kashmir even once during the past nine and half months of its constitution.
Sources said that earlier though the commission had planned to visit Union territory Jammu and Kashmir, but it couldn’t visit due to the severity of coronavirus pandemic and more so because of the District Development Council (DDC) elections.
However highly placed sources told news agency KINS that now the commission is likely to visit J&K in the February- March to seek views of political parties and people on the delimitation of constituencies.
Asked whether the Coronavirus-induced lockdown had delayed the work of the Delimitation Commission, a source said that the panel remains “unstoppable” and continues with its task.
Sources said that the first visit of the commission will discuss how to ensure equal distribution of assembly seats among the two regions.
However KINS could not contacted any member of the commission for the comments over the visit.
As per the reorganisation act of J&K 2019, Ladakh UT will have no Assembly while J&K UT will have an Assembly after elections but prior to elections delimitation exercise was a must.
For detailed analysis for delimitation of the Assembly constituencies, sources said that the commission was studying the data pertaining to electorates in J&K including region, district, Assembly segment and block wise.
The Delimitation Commission is headed by Justice (Retired) Ranjana Prakash Desai and comprises Sushil Chandra, Election Commissioner and Hridesh Kumar, the Chief Electoral Officer (CEO) J&K. It has all five Lok Sabha MPs from J&K including Union Minister of State in PMO Dr Jitendra Singh, Dr Farooq Abdullah, Jugal Kishore Sharma, Mohammad Akbar Lone and Justice (Retired) Hasnain Masoodi as associate members. However, the National Conference, which has three members, has already dissociated from the Commission.
Top BJP leaders that include national vice president Avinash Rai Khanna and BJP General Secretary (Organisation) Ashok Koul had told KINS that they would like the delimitation commission to keep the population, topography, geography and area in mind while making recommendations. “Our motive is to end regional balance,” they had said.
“The delimitation exercise is going on. As soon as the delimitation process is over, there will be elections in the future so that the Union Territory has its own government, which will undertake development work with renewed vigour,” one of the top BJP leaders told KINS wishing not to be named.
The Delimitation Commission, according to sources, was also carrying out detailed study of the Assembly constituencies which can be reserved for Scheduled Tribes and Scheduled Castes.
Sources said that there were indications that seats to be reserved for SCs could also go up by one or two.
The Commission has been mandated to delimit the constituencies of the Union Territory in accordance with the provisions of Part V of Jammu and Kashmir Reorganization Act, 2019 and Delimitation Act, 2002, by the Union Ministry for Law and Justice on March 6 this year.
While splitting Jammu and Kashmir into two Union Territories, the Union Home Ministry had increased Assembly seats of Jammu and Kashmir by seven taking total seats to 114-24 of which are reserved for Pakistan occupied Kashmir (PoK) while election will be held for 90 seats.
Erstwhile State of Jammu and Kashmir had 111 seats including 24 reserved for PoK while elections were held for 87 seats. With creation of Ladakh as Union Territory, four seats of the region were reduced and the Assembly was left with 83 seats. However, with an increase of seven seats, J&K UT will have an Assembly of 90 seats. Two Women MLAs will be nominated to the House, which was the position earlier also.
In the previous Assembly, Kashmir had 46 seats, Jammu 37 and Ladakh four.
The Union Territory of Jammu and Kashmir came into being on October 31, 2019 after the state was reorganised and bifurcated into two Union Territories, Ladakh being the other.
It is to mention here that Prime Minister Narendra Modi in his Independence Day address on 15 August announced that elections will be held in Jammu and Kashmir after a delimitation process in the Union Territory was over.
“The delimitation exercise is going on in Jammu and Kashmir under the chairmanship of a retired Supreme Court judge. As soon as the delimitation process is over, there will be elections in the future,” Modi had said. (KINS)

Avoid duplication of procedures to facilitate the beneficiaries: Lt. Governor to officers

South Kashmir’s Shopian in a ‘tight grip of fear’