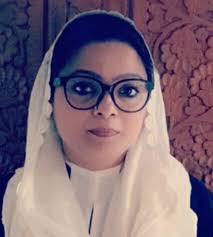 Srinagar Dec 29 (KINS): With crime against women on rise in Kashmir, Senior Supreme Court lawyer Vasundhara Pathak Masoodi, who remained last chairperson of J&K Women’s Commission that ceased to exist, tells Kashmir Indepth News Service (KINS) crime reporter about the significance of the Commission and how the crime against women and children could be curtailed:

KINS: How important was State Women’s Commission for safety of women and child rights in J&K?

Masoodi: The Jammu and Kashmir State Commission For Protection of Women and Child Rights Act provided for the establishment of the Jammu and Kashmir State Commission For Protection of Women and Child Rights (JKSCPWCR) was a masterpiece of legislation that conjointly provided for the protection of women and child rights. Some of the important powers of Commission  included, but not limiting to, investigation of matters relating to Constitutional and legal safeguards for women and children, taking up cases of violations of rights of women and children ; to inspect homes/jails/hospitals and other places where women and children are lodged or kept or imprisoned. The greatest potential for intervention, personally my favourite, was the power to look into complaints and take suomoto cognizance of violation of rights. The JKSCPWCR Act provided for all the powers of a civil court including that to summon a person from any part of J&K; to require production of documents; require evidence on affidavits; access to public records and the power of issuing commissions for the examination of witnesses and documents. The dynamism of the office of Chairperson of the Commission coupled with the aforesaid powers and through its members and civil society can reach out at the grassroots to ensure the implementation of welfare laws in letter and spirit.

KINS: What needs to be done to stop crime against women?

Masoodi: I personally feel that crime against women and children could be curtailed to a considerable extent if we chart out a strategy whereby we focus equally on crime prevention as much as we focus on post commission of crime remedies. There cannot be a bullet shot approach in stopping such crimes as the root of such crimes lies in the mind-set which is built over years. Hence, besides stringent provisions of law there must be a comprehensive strategy to infuse and inculcate virtues of morality in young boys by involving them in various kinds of workshops and orientation programmes wherein they respect, importance and role of girls and women in different capacities must be taught to them on regular basis. Simultaneously, there should provision of safe spaces at public places, quick and swift crime response system, research on attitudes, perceptions, and behaviours of men and boys, as well as young people, related to various forms of violence, and supports advocacy, awareness-raising, community mobilization, and educational programmes, as well as legal and policy reforms, widespread awareness of sexual violence laws through print media, electronic media and social media, if done properly, can prove to be very fruitful. Unfortunately, despite so much water has flown under the bridge, we have yet not reached half way mark towards achieving a just and ideal society for women.

KINS: What role society can play to curb on crime against women?

Masoodi: As I said earlier the root of such crimes rests in the mind-set which is built over years. Hence, besides stringent provisions of law there must be a comprehensive strategy to infuse and inculcate virtues of morality in young boys by involving them in various kinds of workshops and orientation programmes wherein the respect, importance and role of girls and women in different capacities must be taught to them on regular basis. Importantly, recognizing and speaking out against violence is extremely crucial, one must ring the bell against violence as soon as it is committed for failure to rise or report against such violence not only emboldens the culprit but also sends out a very dangerous signal in society because of which many prospective offenders take things for a ride and commit such dastardly acts without any fear of law. We must thrive to create a just society wherein girls and women are not subjected to gender based discrimination and they are provided with equal academic, social, economic and political opportunities and women should be given their due share in the decision making process and only then we can fairly cherish for a bright, safe and secure future for girls and women in our country.

KINS: On an average how many calls you receive from victims per month?

Masoodi: Ever since the closure of Commission, my office has been receiving somewhere between 5-10 complaints in a month through calls, mails, personal messages and social media.

This was second part of her interview (KINS)