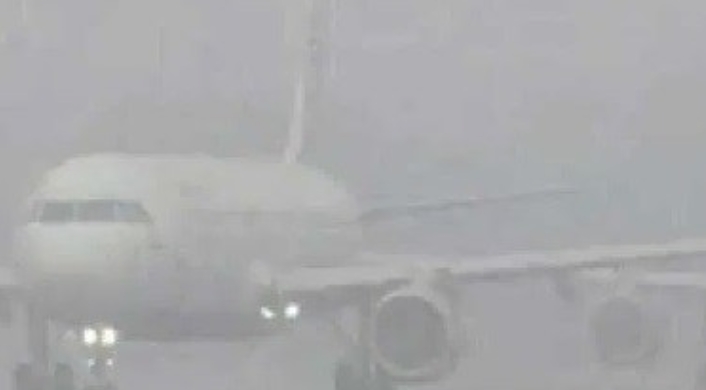 Srinagar, Dec 29 (KINS): Four flights to and from the Jammu airport were cancelled and seven more delayed as dense fog engulfed the region on Tuesday, a day after high-altitude areas, including the Vaishno Devi shrine, received the season’s first heavy snowfall, officials said.

He said visibility was zero at the airport at 9 am, and it improved to 500 metres at 1 pm.

“We are waiting for the visibility to improve to the required level (1,000 to 1,200 metres) to restart the flight operations,” the director said.

Normal life was been hit across the Jammu plains by the dense fog and chilly weather, the officials said.

The fog cleared in most parts by noon, providing some sort of relief to the people, they added.

The minimum temperature in Jammu fell by over two notches compared to the previous night to settle at 3.7 degrees Celsius, which is 3.7 degrees below the normal during this part of the season, a spokesperson of the Meteorological department said.

He said the city had recorded a maximum temperature of 13.2 degrees Celsius on Monday, which was 5.8 degrees below the season’s average.

The day and night temperatures plunged below the season’s average following moderate to heavy snowfall in the high-altitude areas in most parts of Jammu region during the intervening night of Saturday and Sunday.

While the Jammu-Srinagar national highway remained open for traffic, Mughal Road, which connects the twin districts of Rajouri and Poonch in Jammu region with south Kashmir’s Shopian district, was closed after Peer Ki Gali and adjoining areas witnessed heavy snowfall.(PTI)

Leave no seat vacant in ITIs: Samoon to Officers

Mainstream political parties for revocation of disengagement order of workers