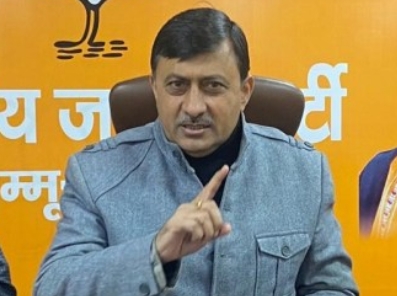 A statement of BJP issued here said that while addressing a news conference at the BJP’s party headquarters here, Gupta said BJP had emerged as the single-largest party in Jammu and Kashmir and termed the oath ceremony of the newly-elected DDC members as the dawn of new era in J&K.

The statement quoted him as saying that the “Gupkar Gang” would fail to elect even a single chairman across all districts of J&K and asked them to accept the verdict of the people.

“The previous regimes of National Conference (NC), Peoples Democratic Party (PDP) and Congress deceived people and never allowed democracy to flourish in J&K,” Gupta said in the statement. “They blocked the Panchayati Raj and municipality institutions and never allowed decentralisation of power which is the basic tenant of Indian democracy.”

The statement said that speaking on the oath ceremony of DDC members from Kashmir, the BJP general secretary said Kashmir echoed with the slogan of ‘Bharat Mata Ki Jai’ and ‘Vande Mataram’.

“In 1953, Shyama Prasad Mukherjee sowed the seeds of complete democracy and integrity of Kashmir with the nation which under the leadership of Narendra Modi ripened its fruit. For 73 years we have been saying that the land where Mukherjee martyred, that land of Kashmir is ours. Today, Modi has given life to that slogan and made Kashmir an integral part of India,” he said in the statement.(KINS)