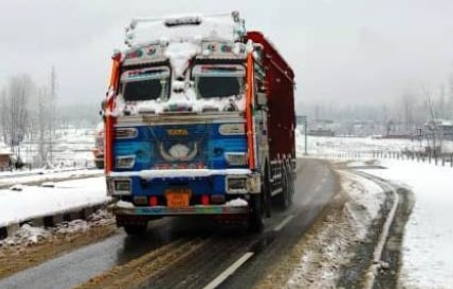 Srinagar, Dec 30 (KINS): Traffic was on Wednesday disrupted for several hours on 270-km-long Srinagar-Jammu national highway after two trucks skidded off the road while the historic 86-km-long Mughal road remained closed due to accumulation of snow and slippery road conditions.
One-way traffic continued on the highway, the only road connecting Union Territory (UT) of Ladakh with Kashmir despite below freezing temperature resulting in freezing of water and snow at Zojila, Zero point and India gate.
Traffic on the national highway, the only all weather road linking Kashmir with the rest of the country, was disrupted this morning after two trucks skidded off the road due to slippery conditions, official sources told UNI.
They said the trucks blocked the road and large number of vehicles, including those carrying passengers and essentials, got stranded between Qazigund and Jawahar tunnel. Later, cranes were pressed into service and both the trucks were taken to one side of the road before traffic was again allowed after several hours.
Weather is pleasant after the Sun came out though icy cold winds also continued in the area, particular at Shaitan Nallah and Banihal, they said.
Today traffic was to ply from Srinagar to Jammu, a traffic police official told UNI adding Traffic Control Unit (TCU) Srinagar shall liaise with TCU Ramban before allowing traffic. Light Motor Vehicles (LMVs) will be allowed to cross Zig Qazigund between 1000 hrs to 1400 hrs only, he said no vehicle will be allowed after cut off timing.
Security forces and Heavy Motor Vehicles (HMVs) will also ply from Srinagar and Qazigund respectively towards Jammu today.
He said only one-way traffic is allowed on Srinagar-Leh national highway despite snow on the road, particularly at Zojila pass. Today vehicles will ply from Srinagar to Kargil between 1100 hrs hrs to 1600 hrs, he said adding vehicles may carry anti skid chain to gain more grip on the slippery road. This is for the first time that traffic is allowed on the highway in December ending also. However, Night travel between 1800 hrs to 0900 hrs next morning will remain banned from Gagangir and Sonmarg on the highway.

He said the Mughal road, connecting Shopian in south Kashmir with Rajouri and Poonch in Jammu region remained closed due to accumulation of snow and slippery road condition for the past three weeks. There was fresh snowfall since last night on the road, which is seen alternative to Srinagar-Jammu national highway. The road remained closed for winter months due to snow every year.(KINS)