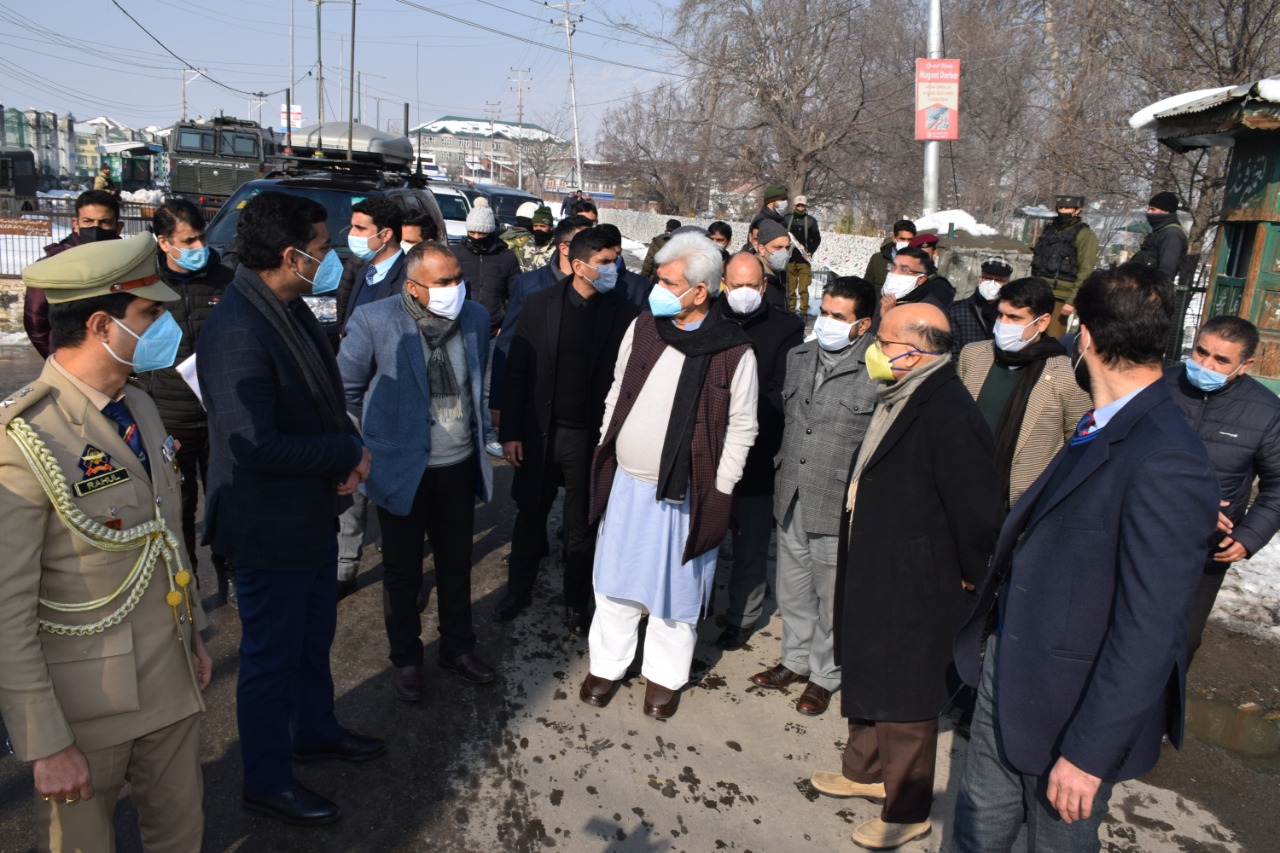 LG directs senior officials to ensure team on the ground is functional round-the-clock to provide maximum relief to common man
SRINAGAR JANUARY 13: To assess the situation arisen due to heavy snowfall in Kashmir, Lieutenant Governor, Manoj Sinha today visited Srinagar and took stock of the measures undertaken for snow clearance and restoration of essential supplies across Kashmir.
The Lieutenant Governor received a firsthand appraisal of the response mechanism put in place to restore affected services, from the concerned officers in a meeting held here at Raj Bhavan.
The Lieutenant Governor sought a detailed report on the status of restoration works especially road, water, and power being carried out by different departments across Kashmir.
The Lt Governor was informed that the continuous snowing for the past few days has affected normal life throughout the Kashmir Valley, however, the administration, following the directions of the Lt Governor, had started restoration work on war footing from day one to ensure that people do not face any inconvenience.
The Lt Governor issued specific instructions to all the concerned officers, field-level officers to ensure swift completion of snow-clearance and dewatering of all lanes and by-lanes. He also directed them to monitor restoration efforts and ensure round-the-clock operations for the earliest possible restoration in areas where public services are still disrupted. He enjoined upon them to remain at the beck and call of the people and ensure an uninterrupted supply of essentials and healthcare facilities across the valley.
The Lt Governor directed senior officials to ensure adequate men and machinery for snow clearance of city lanes, village link roads and further asked them to ensure the team on the ground is functional round the clock to provide maximum relief to the common man.
The Lt Governor was informed that the power supply in all districts of Kashmir has been restored. It was given out that all 115 33KV lines stand restored and 255 receiving stations, except receiving station Machil, stands restored. It was also informed that 951 (11KV) feeders have been restored, while as out of 945 damaged DTs, 720 have been restored and the remaining shall be made functional soon.
Similarly, it was informed that the R&B department has cleared snow from 7892 km of road length out of a total of 8026 km across Kashmir, while some remote areas which witnessed heavy snowfall including roads in far-flung areas of Shopian, Budgam, and Kulgam are being cleared and will be made motorable by tomorrow.
Sh. BVR Subrahmanyam, Chief Secretary; Sh. Rohit Kansal, Principal Secretary, Power Development Department and Information Department; Sh. Shailendra Kumar, Principal Secretary to the Government, Public Works (R&B) Department; Sh. Pandurang K. Pole, Divisional Commissioner, Kashmir; Sh. Vijay Kumar, IGP, Kashmir; Sh. M Raju, Secretary to the Government, Jal Shakti Department; Dr. Shahid Iqbal Choudhary, Deputy Commissioner Srinagar; Sh. Mohammad Aijaz, MD, KPDCL, besides Chief Engineers of PDD, PHE, R&B, Commissioner SMC, and other officers were present in the meeting.
Later, the Lieutenant Governor conducted a whirlwind tour of Srinagar city to inspect the snow clearance and other restoration works. The Lieutenant Governor visited Lal Chowk, TRC crossing, Sonwar, Dalgate, Nishat, foreshore road, Hazratbal, Saida Kadal, Rainawari, Khanyar, Dastageer Sahib, Babadam, Monawarabaad, and other areas of Srinagar City and took the firsthand assessment of the situation.
At Lalit Ghat, the Lt Governor interacted with the Shikara walas and enquired about the present tourism scenario. He also assured early redressal of the genuine issues put forth by them during the interaction.

Pangong Lake opens after a year in Ladakh, raises hope among tourism players

Who can a girl trust if not even her own father?: Mehbooba reacts to Bandipora incident