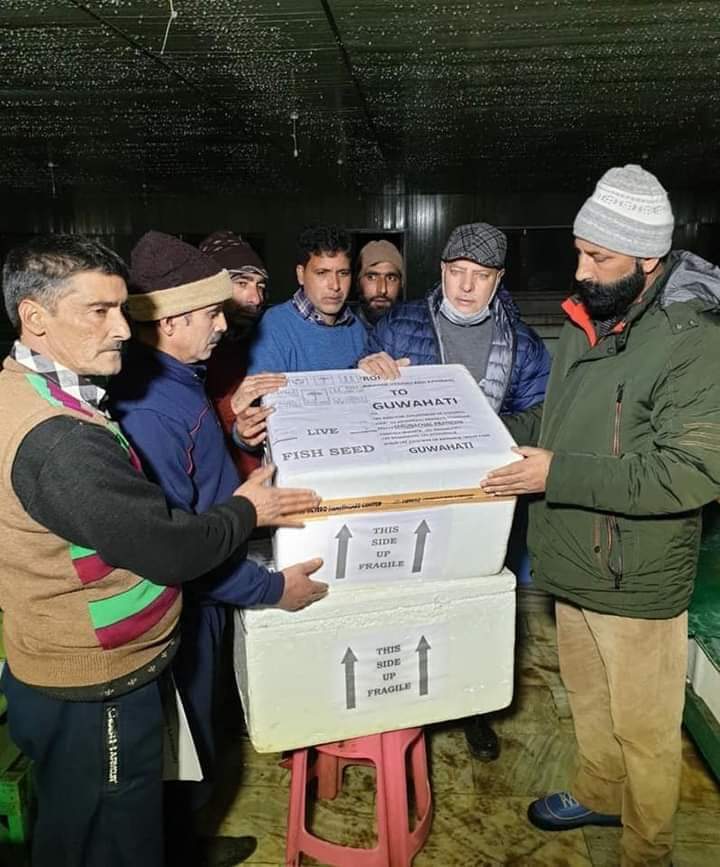 KINS Correspondent
Srinagar Jan 18 (KINS): In a significant development, at least 70 lakh eggs have been obtained from Trout fish at Kokernag fisheries farm this season and would generate huge revenue to Fisheries Department.
Known for its natural beauty, Kashmir has the distinction of having Asia’s largest fisheries farm in Kokernag.
The farm is emerging best producer of Rainbow Trout fish across the world.
Due to serious efforts by its officials, at least 70 lakh eggs have been obtained from Trout fish this season so far.
Chief Project Officer (CPO) of the farm, Mohammad Muzaffar Bazaz said the farm is known worldwide for its production.
“Rainbow trout is cold water fish and should have temperatures between 0 to 20 degree Celsius. It is rich in protein and boosts immunity. The revenue and production increase with each year,” he told news agency Kashmir Indepth News Service (KINS).
“We have sold five lakh eggs so far this season to several states including Uttrakhand and Nagaland and generated revenue of Rs 10 lakh to the farm,” he said.
Every year between November and February, eggs are obtained from Trout fish in this farm. It has a breeding period of 51 days. After then fish are given feed first in tanks then taken to water reservoirs before taking them to sale centres.
The project is managed by the local officials who are technically knowhow about trout seed production.
Syed Manzoor is the supervisor of the farm, who has well expertise in rearing fish.
The Fisheries Department set up a trout farming project at Kokernag in south Kashmir with the European Economic Community’s assistance in 1984.
The infrastructure has been upgraded over the years and Kokernag has turned out to be Asia’s largest fish farm project.
After achieving success in breeding trout, the Department over the years has ensured that the trout which was considered as a Royal food reaches the common people in Kashmir.
The introduction of trout in Kashmir for angling is credited to a Britain Frank Mitchell. In 1899, he reared the trout in the premises of his private carpet factory at Bagh-e-Dilawar Khan, located in Shahr-e-Khas. He established the first trout hatchery at Harwan in 1901 and trained the locals. (KINS)

Detention of political leaders, internet gag worrying in J&K: US