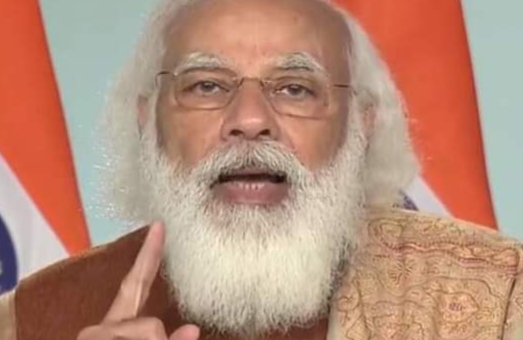 Srinagar, Jan 23 (KINS): CRITICISING politics over coronavirus vaccines and trying to allay fears regarding the same, Prime Minister Narendra Modi said Friday that he had been under a lot of “pressure” but left the call on when to introduce the vaccines to scientists.

According to news agency KINS, in a televised interaction with beneficiaries and vaccinators of the Covid vaccines in his constituency Varanasi, he also urged people to believe health workers and doctors, and suggested that hospitals initiate “competitions in vaccination” so that the country could move quickly to the second phase of the drive.

Without referring to questions raised regarding emergency use clearance to the indigenously developed Covaxin despite some missing data regarding trials, Modi said at the 30-minute video-conference, “Mere pe bada pressure aata tha, vaccine kyon nahin aati hai, vaccine kab lagaoge? Rajneeti mein idhar ki bhi baat hoti hai, udhar ki bhi baat hoti hai. Main ek hi baat karta tha, ki vaigyanik jo kahenge wahi karenge, yeh hum political logon ka kaam nahin hai (There was a lot of pressure on me, as to why the vaccine is not coming, when it would be administered. In politics, people say all kinds of things, but I would say only one thing, that we would do what the scientists say, it is not something for us politicians to decide).”

He added, “When the go-ahead from the scientists came, we had to decide from where to start, and we decided to do it from health workers who handle patients constantly.”

The PM had launched the inoculation drive in the country on January 16, with three crore health and frontline workers to be administered the vaccines in the initial phase. However, the authorities have been struggling with hesitancy among the intended beneficiaries, including doubts over Covaxin. The other vaccine being administered is the one developed by Oxford-AstraZeneca and manufactured by the Serum Institute of India.

“When doctors and health workers give clean chit to a vaccine, it sends a very strong message among people about the efficacy of the shots,” Modi said, going on to laud scientists as modern “rishis (saints)”, who had toiled day and night against “an unknown enemy”.

The PM said India was not only “atmanirbhar (self-sufficient)” in one of the greatest needs of the world now, but is also helping other countries.

He regretted that he could not personally be with those involved in the drive in Varanasi, noting that around 20,000 had been vaccinated in the district alone in the first phase.

He added that initiatives like Swachhta Abhiyan meant India was better equipped to handle Covid-19.

One of the people the PM talked to was Pushpa Devi, of the district women’s hospital, urging her to share her experience with vaccination. She said she had not developed any side-effects, and wanted to tell others that “it was like any other injection”. Noting that words of health workers like her count more than what he says, the PM underlined that there had been no major adverse events since the start of the drive.

Health worker Rani Kunwar of the same hospital said, “People bless us for the vaccine that we got within 10 months due to you.”(The Indian Express)

Encounter breaks out between security forces and militants in  Parimpora

Weather likely to improve from today in Valley: Met

CBWT: Section 144 to be imposed around Examination Centres at B’la