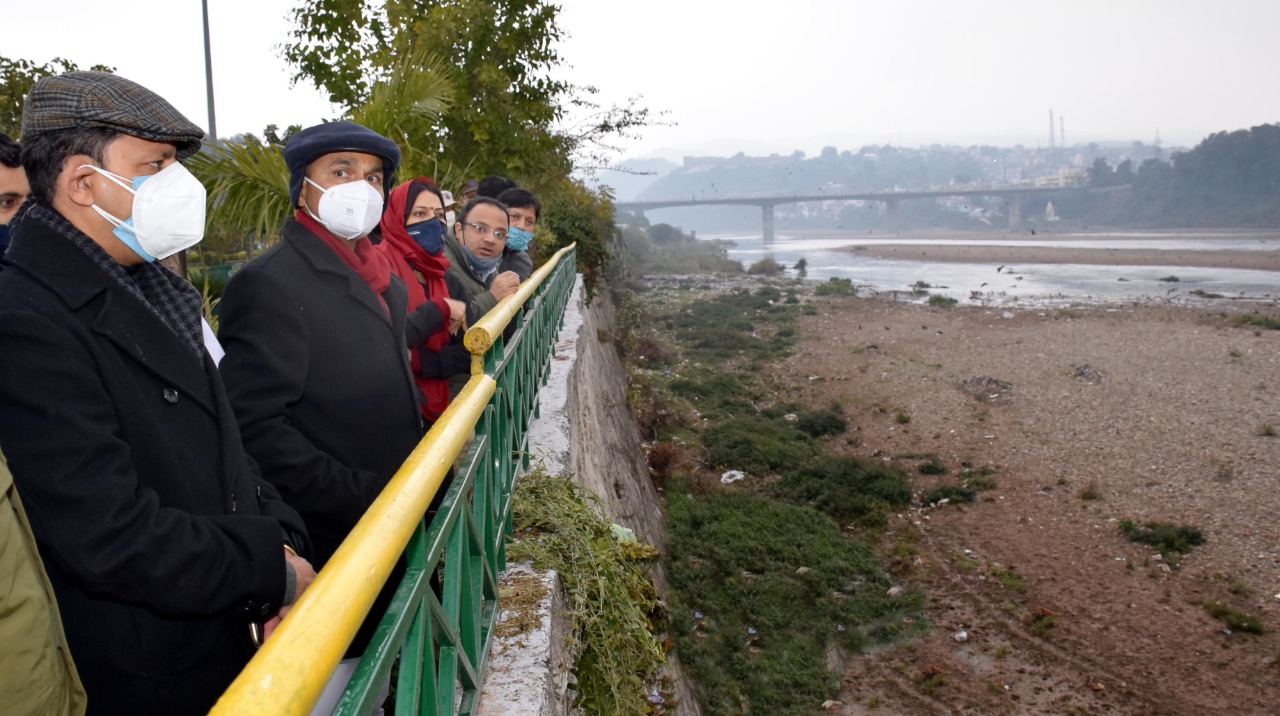 Issues directions to expedite the development of Mubarak Mandi, Raghunath Bazaar and Tawi River Front
Takes firsthand appraisal of the Heritage trail and the park improvement projects proposed for the ongoing Jammu Smart City Project
JAMMU, JANUARY 23: Principal Secretary to Lieutenant Governor, Nitishwar Kumar today conducted a whirlwind tour of Jammu city and visited tourism and heritage sites including Mubarak Mandi, Parade, Raghunath Bazaar, Rani Park and Hari Singh Park.
During his visit, the Principal Secretary took firsthand appraisal of the Heritage trail and the park improvement projects proposed by the Project Management Consultants (PMC) for the ongoing Jammu Smart City Project and issued directions to the concerned authorities for expediting the works undertaken for the development of Mubarak Mandi, Raghunath Bazaar and Tawi River Front.
The Principal Secretary was briefed about the proposal and the members of the expert team provided the critical inputs. He directed that all the elements that could lead to the ease of mobility of citizens, be incorporated in the detailed proposal.
The Principal Secretary laid special emphasis on creating robust tourism infrastructure, besides increasing accessibility and connectivity to the tourist potential areas by bringing them under the tourism circuit.
The Principal Secretary directed the concerned officers for augmentation of facilities for the tourists including creation of rain-sheds, parking spots, robust civic amenities infrastructure, underground drainage, beautification of roads connecting the tourists’ sites, and other places of religious and historical importance, installation of smart lights, developing musical corners for cultural activities and entertainment of tourists.
He instructed that a suitable model of an old post office be constructed at the site where the Old Post office existed before being shifted to its new premises. He also suggested the creation of sitting spots on the old hospital road for the elderly.
The heritage of the city, the significant happening of the events contributing to the evolution of present-day Jammu be identified and highlighted along the trail. The Heritage trail should culminate and conclude on the Tawi river, said the Principal Secretary.
The Principal Secretary asked the concerned officers to explore the possibilities of developing multi-tier parking facility, besides creating one-way traffic system and limiting vehicular traffic along the heritage trail by providing battery-operated urban transport system such as battery cars or rickshaws, laying all the overhead wires in a duct specially constructed for this purpose, installation of display boards & signage highlighting the history of the old buildings and the cultural heritage associated with them.
Sh. Sanjeev Verma, Divisional Commissioner, Jammu; Ms. Sushma Chauhan, Deputy Commissioner, Jammu; Sh. Satish Kumar Sharma, Additional CEO JSCL, Consultants from JSCL along with the representatives of PMC accompanied the Principal Secretary.

Athletes will have lifetime experience at Gulmarg: Sarmad Hafeez