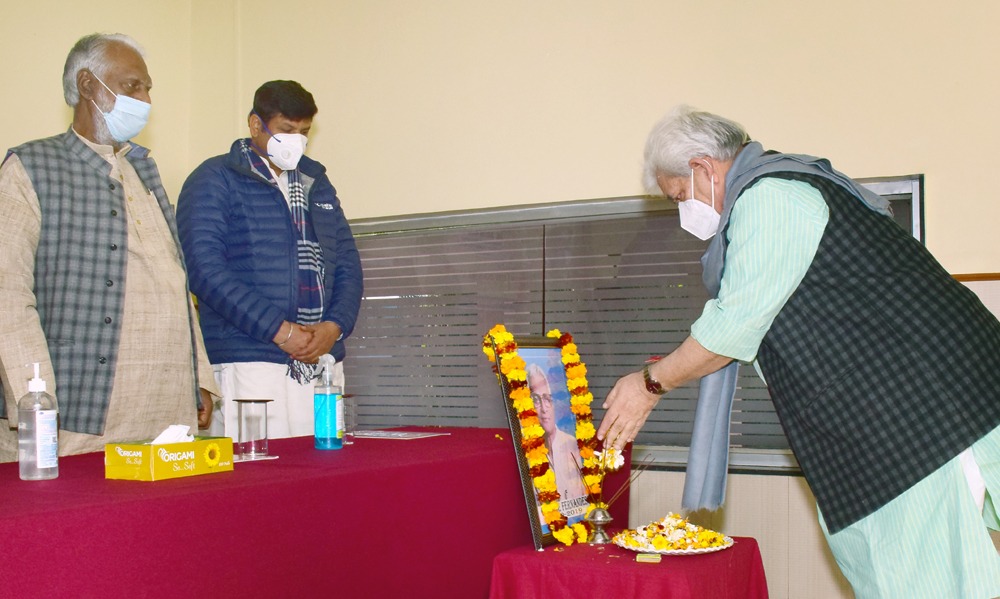 Attends commemoration conclave on his 2nd death anniversary
‘George Fernandes always stood firm for equal rights for every citizen, lived for the welfare of others till his last breath’
KINS Desk
Jammu Jan 29 (KINS): Lieutenant Governor, Manoj Sinha Friday paid floral tributes to the former Defence Minister, George Fernandes during his second death anniversary commemoration conclave organized by George Fernandes Foundation, in collaboration with Hind Mazdoor Kissan Panchayat, J&K Unit and Step India J&K Unit at Press Club.
Remembering the former Union Minister, the Lt Governor observed that George Fernandes ji was a fearless leader, who tirelessly worked for the upliftment of the underprivileged. He worked for multidimensional development of the society and will continue to inspire the nation with his courage and selflessness, said the Lt Governor.
The Lieutenant Governor, while addressing the gathering, shared his experiences of working with the former Union Minister and recalled the great leader as a well-wisher of the downtrodden. He was an extraordinary personality and able leader. He was instrumental in the eradication of many social inequalities and always worked for the welfare and development of the people.
Throwing light on the working of the former Union Minister, the Lt Governor observed that while being the Minister for Railways, George Fernandes made Konkan railways a reality connecting Mumbai with Mangalore through many crisscrossing rivers, valleys and mountains.
The Lt Governor said that George Fernandes ji advocated transparency in the Government Systems and always stood firm for equal rights for every citizen of the country.
Underlining the importance of transparency and accountability, the Lt Governor said that the present dispensation has laid a mechanism to make information of all Government works available in public space. He observed that people have equal responsibility in government decisions and their active participation is always sought by the UT Government.
Dr Arun Kumar, Former MP and President, George Fernandes Foundation gave a brief overview of the life of George Fernandes. He spoke in detail about his struggle and public service throughout his life. George Fernandes worked for making India a global leader, he added.
While speaking on the occasion, Ashutosh Pathak also shed light on the life and vision of George Fernandes. “The former Defence Minister, an inspiration for the young generation, was a symbol of simplicity. His work was focused on the welfare of the marginalized and underprivileged sections of the society”, he said.
Prominent among others, present on the occasion were Uttam Gade from Hind Mazdoor Kissan Panchayat and Mohd. Hafiz, J&K Convener of the organization, besides Labour leader from Mumbai, Pramod Gaonkar, and prominent persons from all walks of life. (KINS)

We need to introspect what J&K has got in the past 70 years: Lt Governor

Sinha’s appointment might be to provide relief to BJP leaders in Jammu: Hasnian Masoodi