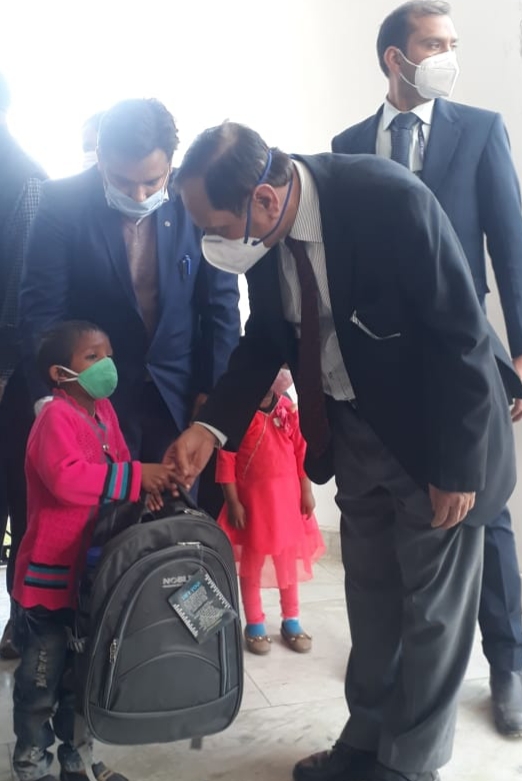 UDHAMPUR, FEBRUARY 02 (KINS): In order o take stock of various ongoing developmental works being executed in the district, Advisor to Lieutenant Governor, Rajeev Rai Bhatnagar today conducted a day long extensive tour of District Udhampur and took first-hand appraisal of the ongoing project works there.
Deputy Commissioner Udhampur, Dr. Piyush Singla; SSP Udhampur, Sargun Shukla; Chief Engineers of R&B, JKPCC, Jal Shakti and PMGSY, other senior officers of the concerned departments also accompanied the Advisor during the tour.
While inspecting the ongoing Construction works of 160M Span Double Lane Motorable Bridge on Jajjar Panthal Road, the Advisor was informed that the bridge is being constructed at an estimated cost of Rs 19.39 crore and after completion of project more than 12 km distance will be reduced. The Advisor was also informed that the bridge will also facilitate smooth travel of public towards the hospital.
The Advisor directed the concerned executing agency to maintain the quality of project and stressed to complete the project within specified timeline.
Advisor Bhatnagar also inspected ongoing construction works on 30 M Span Motorable Bridge on Tikri Chanas Road built at an estimated cost of Rs. 2.75 crores. The Advisor was informed that 75% physical progress of the project has been achieved and it will be completed by March end.
The Advisor directed the concerned officials to expedite the pace of works on the said project and complete it within the fixed deadline as it caters to large number of population.
Meanwhile, Advisor Bhatnagar also inspected the ongoing works of Water Supply Schemes at Phallata and Malhar. The Advisor was informed that the Phallata Scheme is being constructed at an estimated cost of 3.59 crores and June 2021 is the date of completion for the project while as Malhar Scheme is being built at an estimated cost of 7.16 crores with December 2021 as the date of completion.
The Advisor directed the officials of the concerned executing agency to complete the project before the onset of monsoons as the projects are very prestigious for the district and both the schemes will benefit large number population in terms of drinking water availability.
Advisor Bhatnagar also visited Government Higher Secondary School Garhi, Government Boys Middle School, Garhi, Government Middle School, Phallata and inspected these educational institutions.
At Higher Secondary Garhi, the Advisor interacted with the teachers and students who had resumed classes after the pandemic COVID-19. The Advisor also inspected the newly established ICT lab at the school.
The Advisor asked the principal of the school to follow necessary COVID guidelines in the institution besides daily screening of students should be conducted for reducing the chances of COVID-19 infection. He directed the principal to keep all facilities like hand sanitizers, soaps and other required needs available for the students.
At the Middle schools Garhi and Phallata, Advisor Bhatnagar directed the concerned officials for carrying out the required renovations of the school building and asked them to make all basic facilities available in the schools for the students.
Advisor Bhatnagar also directed the DC Udhampur and Chief Education Officer for rationalisation of the staff in those schools having less enrolment. He asked them to submit the detailed teacher pupil ratio of all schools of entire district.
Meanwhile, Advisor Bhatnagar also visited Government Degree College Women, Udhampur and inspected the ongoing construction works and other allied infrastructure at the college.
The Advisor directed the officials of concerned executing agency to construct the required infrastructure with all necessary basic facilities besides the landscaping of the college .
Advisor Bhatnagar also visited the construction site of Government Polytechnic College, Udhampur and inspected the ongoing works there. He took a detailed inspection of the infrastructure built there and also took on spot appraisal of other allied infrastructure being established.
The Advisor directed the concerned executing agency to complete the project within the given time frame so that the project can be dedicated to the public.
Later, Advisor Bhatnagar held a meeting with the senior civil and police officers of the district at Dak Banglow here .
Speaking during the meeting, Advisor Bhatnagar maintained that the present administration is giving major push to the infrastructural development of entire Jammu and Kashmir and the efficient delivery of public services is the core objective of present dispensation.
The Advisor impressed upon the officers to maintain the quality of work in all ongoing projects besides financial discipline as per the new guidelines should be maintained while carrying out different works.
During the visit, Advisor Bhatnagar also interacted with BDC Chairperson, PRI representatives and various locals.
BDC Chairperson, Tikri, Nisha Sharma while interacting with the Advisor raised several developmental issues with the Advisor. She demanded upgradation of PHC Tikrito Trauma Centre or Sub-District Hospital, Degree College for Tikri and over head briges on National Highway at Tikriand Mand East.
A delegation of locals of Panchayat Halqa Dabria raised several issues with the Advisor. They demanded immediate improvement in the water supply scheme of their area.
Several other locals also raised several issues pertaining to their areas with the Advisor and demanded immediate redressal of the same.
The Advisor listened to each of them carefully and assured them that all of their genuine issues will be resolved on priority.

ECI to take final call on elections in JK: Governor