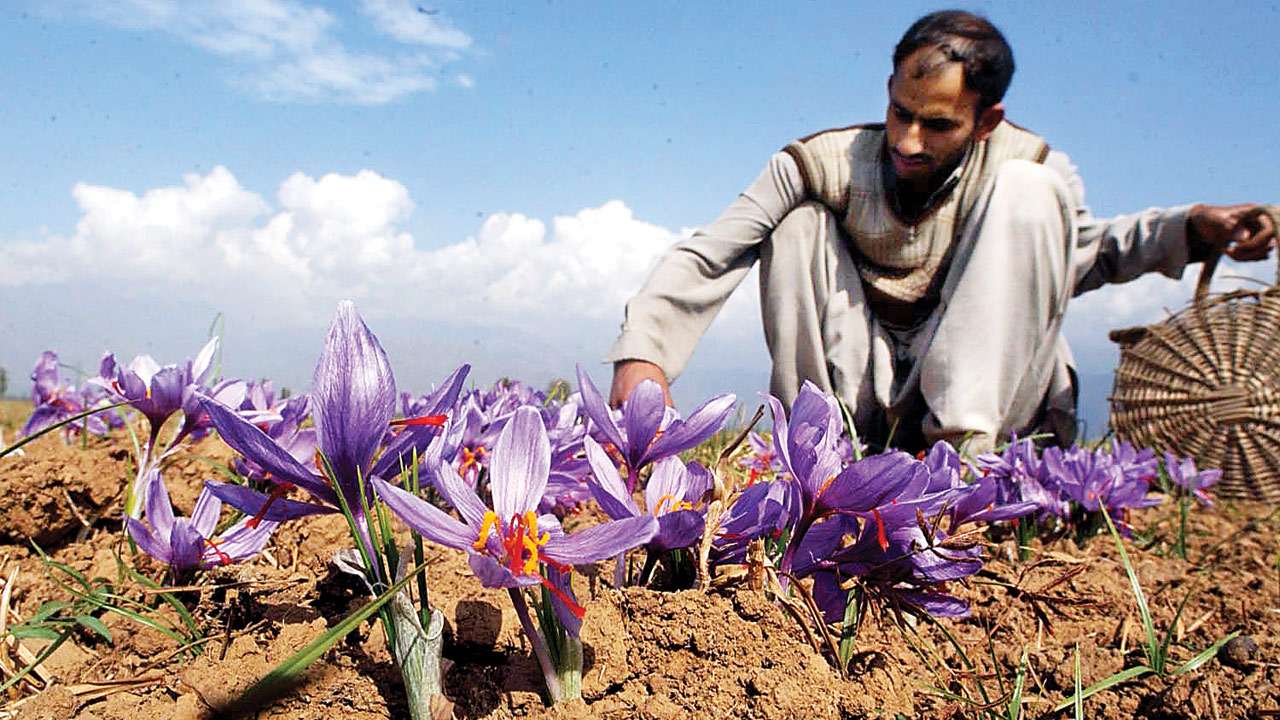 Srinagar July 02 (KINS): There has been decline of Kashmiri saffron production, forcing farmers to switch to other crops.

Bashir Ahmad, a 55-year-old farmer of Pampore in South Kashmir’s Pulwama district remembers when he would cultivate saffron on eight kanals of land two decades ago. (20 kanals are equal to around 1 hectare of land). Each year his family would earn around Rs 1.80 to Rs 2 lakh from 2 kilogram of saffron production.

Then worries began for them when saffron production started to decline. Eight years before, he switched to other crops and planted apples, almonds sapling besides started cultivating vegetables like potato and peas.

“Four kanals of land which is under apple cultivation have started yielding results for the last two years. Last year, I sold apples for Rs 80,000 and this year it went up to Rs 1,30,000. In initial years after planting apple trees, the production remains low then increases with each year. At least apple trees are giving me better returns than saffron,” he told news agency Kashmir Indepth News Service (KINS).

Ahmad believes that dwindling produce and the low market rates were reasons for his switch-over to other crops.

Ahmad believes that lack of irrigation facilities was a main reason for decline in its production over the years.

The Kashmiri saffron is considered the best in the world due to its flavor, colour and aroma.

In Kashmir, three districts – Pulwama, Budgam, Srinagar grow saffron. Among them, Pulwama district’s Pampore has earned the title of Kashmir’s ‘saffron town’ for growing the highest and best quality saffron.

The soil quality in this area is highly suitable for its cultivation.

As low yield has become a deterrent for farmers, hundreds of saffron growers like Ahmad have started cultivating other crops to get better returns.

Mohammad Sultan, who is in his late fifties, has also planted apple, nut trees and vegetables on his six-kanals of land in Pampore. “Fifteen years ago, we would cultivate two kilogram of saffron which reduced to 800 grams. Six-years-ago we started other crops including apples on this land. At least we earn better than saffron through other crops,” Sultan shared.

He said people were forced to sell saffron land due to decline in production.

Farmers say that change in climate and poor irrigation facilities led to decline in saffron production.

More than 16,000 families are associated with saffron production in Pampore. A decade ago, farmers say their number was more than 22,000.

The area under saffron cultivation in Kashmir as per official figures has shrunk from around 5,707 hectares in 1996 to 3200 hectares.

An official of Agriculture Department Kashmir said the saffron land has shrunk over the years due to constructions and switching of farmers to other crops. “But we don’t have figures on how much land encroachments have come up over the years in Kashmir especially in Pampore,” the official added.

Ministry of Agriculture and Production, Government of India started a scheme ‘National Mission on Saffron’ in 2010 with project cost of Rs 400.11 crore. But the project is yet to be completed. Saffron growers in Pampore have been waiting for the completion of the sprinkle irrigation facility to boost production of saffron.

Growers are also worried that Iranian saffron is being sold under Kashmiri tag in Indian markets and other countries.

Scrutinising of daily wagers halted due to COVID in J&K

Notification issued for vacant seats of Sarpanches, Panches in Kupwara