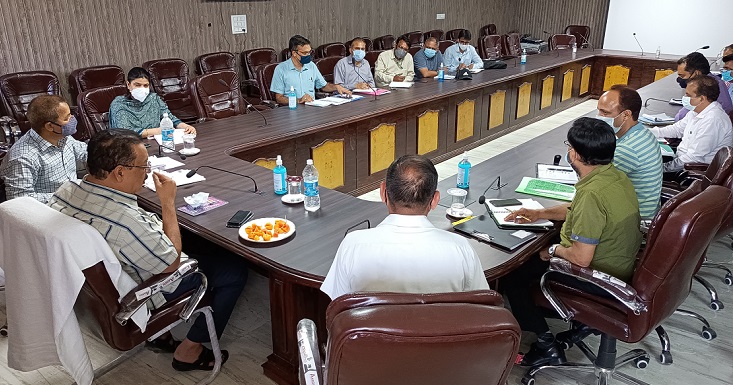 Principal Secretary reviewed district wise progress in respect of plantation being conducted under various schemes of the department. He asked the officers for adopting compact plantation of Aloevera in Kandi belts of Samba and Kathua covering an area of 100 hectare in each district. He said that one Aloevera processing unit will be established there for processing of Aloevera so produced thereby benefitting the farming community of the districts. He also directed for establishing one Olive oil extraction plant at Ramban for production of olive oil and emphasized that apart from increasing production focus should be laid on branding and packaging of the farmers produce.

He exhorted upon the officers to select areas for plantation of different crops in clusters and concentrate on area specific crops so that the production of fruit crops may be commercially exploited. He asked the concerned for establishment of Farmer Producer Organizations of those fruit crops. We should focus on introduction of plantation of exotic varieties and make year 2021-22 as the golden year in the history of Horticulture.

Principal Secretary said that the department would be celebrating Horticulture week with effect from 14th  to 20th July followed by massive plantation drive. He asked the officers to ensure that 6 lakh fruit plants shall be planted during the ensuing rainy season. He also asked to prepare a Detailed Project Report for development of Chakroi Farm, R.S. Pura, on modern lines so that funds shall be released immediately for its development.

He directed the officers to encourage private entrepreneurs for development of High Density fruit plant nurseries according to the Nursery Development Scheme of the department. He asked the Chief Horticulture Officers and Chief Agriculture Officers to conduct regular meetings on monthly basis and chalk out plans for betterment of farming community. He also asked for intercropping with legumes, vegetables and medicinal plants in the vacant spaces of orchards.

Chief Horticulture Officers apprised about the area to be covered under plantation of fruit crops in their respective districts besides presented detailed description about their routine activities.

Woman commits suicide after jumping in Chenab river in DOda

Jammu: 4 held for attempt to murder

PM Modi celebrates this Diwali in Rajouri with Army soldiers