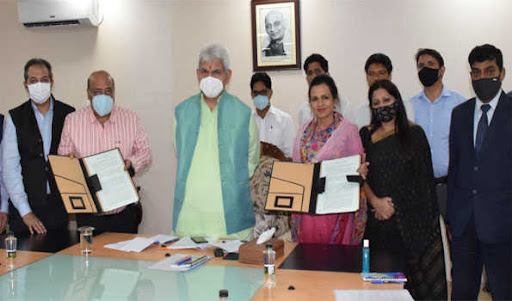 Conservation, restoration of heritage site Shiv Khori in Reasi district to be taken up soon

As part of this commitment, JSW Foundation led by its Chairperson will assist and support the Government of J&K, both financially and technically in preserving the two heritage gardens under CSR.

Speaking on the occasion, the Lt Governor termed the signing of MoU as a new beginning in the conservation of the historic sites which are the hallmarks of J&K’s rich cultural heritage legacy.

“We are making continuous efforts to restore the ancient glory of UT’s heritage places and propose them for inclusion in World Heritage sites”, observed the Lt Governor.

The Lt Governor noted that the preservation of ecology and cultural heritage, along with growth in the industrial sector are key components of sustainable development.

The government is giving  much-needed impetus to integrate the promotion of cultural heritage in UT’s development plan in order to connect the people from across the world with the glorious history of J&K, added the Lt Governor.

The Lt Governor advised the concerned executive agencies to work in close coordination with all stakeholders and have an in-depth understanding of the historic facts and cultural significance while restoring the pristine glory of these heritage gardens.

With its technical expertise, the support of the JSW foundation will provide a determined push to the conservation work of the heritage gardens.

The Lt Governor also underscored the major interventions made by the Government to promote and preserve cultural heritage of Jammu division with an aim to increase the tourist inflow in the region.

We are working on developing prominent pilgrimage shrines like Shiv Khori, besides a Sri Venkateswara Swamy Temple by Tirumala Tirupati Devasthanams is also coming up in Jammu, which will give a major push to tourism sector and at the same time, boost the economy of the region, said the Lt Governor.

JSW Foundation has already conducted a study for conservation and restoration of Shiv Khori heritage site in Reasi, it was informed.

The Lt Governor directed the Floriculture Department to work out a plan to organize a mega-tulip festival in Jammu division also to attract potential tourists from across the globe.

The Lt Governor further directed the officials of the Floriculture department to work in coordination with the forest department for development and preservation of Chaar Chinar in world-famous Dal lake.

It was informed that the project for restoration and conservation of Shalimar and Nishat gardens will be monitored by the project monitoring committee, headed by the Commissioner/Secretary to Government, Department of Floriculture Gardens and Parks.

The project will be taken up in two phases. The estimated cost of the conservation/restoration project of Nishat garden is Rs 7 crores. A similar project is envisaged for the Shalimar garden also.

A coordination team for implementation of the project will be appointed to oversee and monitor the work, establish standards and benchmarks as well protocols for the conservation and maintenance of these gardens.