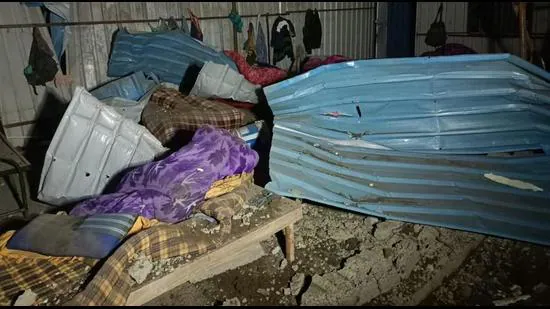 Ramban, Aug 7 ( KINS ) : A 16 year old boy was among the two injured in a suspected grenade attack on the office of a construction company in Banihal area of Jammu’s Ramban around 11 pm on Friday, a police officer said, and added it was too early to call it a terror attack.

‘The entire area has been cordoned off by the police and the army. A search operation has been launched,” said an officer.  A grenade is suspected to have been lobbed at a construction site of MG Construction Company at Gund in Banihal at 11.15 pm on Friday night resulting in minor injuries to a boy and an employee. They were admitted to the sub-district hospital in Banihal, the official quoted above added.

The injured were identified as Gopal Sharma, 35, son of Rattan Lal of Udhampur and 16-year old Mohammad Aquib, who was standing outside a nearby Madarsa where he studied, when the blast took place.

An under-construction office of Bharatiya Janata Party (BJP) district president Mohammed Salim Bhat and the Madrasa were also close to the area of explosion, resulting in the window panes of the Madrasa getting damaged, officials said.

According to people aware of the developments, eyewitnesses said they heard a stone-like object fall on the shed of the company building before the blast. The SSP said a thorough probe will be conducted before arriving at any conclusions. “A mysterious explosion took place. Only after a thorough probe can we say something on it because being a construction site explosive material may have been kept there,” she said.