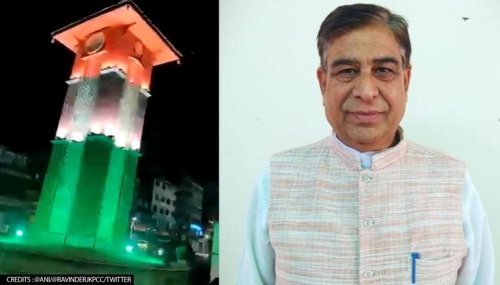 Jammu , Aug 7 ( KINS ) The Congress party on Saturday attempted to politicise the illumination of J&K’s Lal chowk ahead of the Independence Day celebrations, claiming that it was ‘carried out under a security cordon’. Chief spokesperson of J&K Congress Ravinder Sharma remarked that the lighting up of the Lal Chowk in the colours of the national flag ‘did not reduce the distance between Delhi & J&K’ and claimed that the action was not blessed with the will of the people. The leader stated that ‘anything’ could be done under a security cordon and added that it would hold meaning if the citizens of J&K hoist tricolour at their homes.

The Congress leader’s remarks mirror the recent remarks passed by the People’s Alliance for Gupkar Declaration (PAGD) earlier this week. This year, India celebrated the second anniversary of the abrogation of Article 370 and the bifurcation of the erstwhile state into two UTs.

On August 4, Wednesday, the PAGD hit out at the Centre and described BJP’s ‘Naya Kashmir’ slogan as a “joke” and stated that the meeting with PM Modi had borne no fruits on the ground. The alliance said that neither had political prisoners been released nor had the “siege” which Kashmir has been under since 2019 ended.  Here, they had also used the phrase– ‘dil ki doori and delhi ki doori has increased’, which has now been used by Congress leader Ravinder Sharma to talk about the Lal Chowk illumination.

One person arrested for sending threatening messages to girl in Srinagar