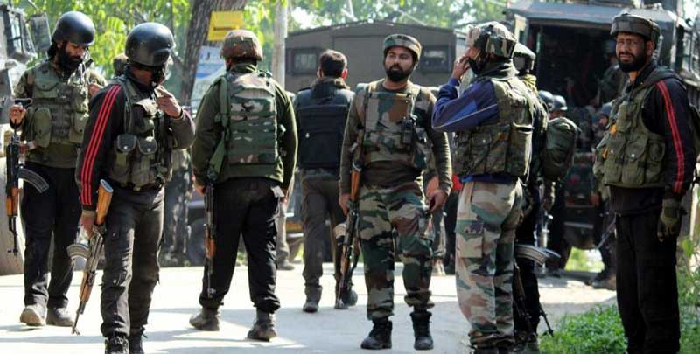 Srinagar, Aug 13 ( KINS ) A top foreign militant of Lashker-e-Toiba (LeT) was killed in an encounter with security forces in Jammu and Kashmir’s Kulgam district on Friday.

The IGP said militants on Thursday afternoon attacked Border Security Force (BSF) convoy on the Srinagar-Jammu highway at Malpora in Kulgam district. There was no injury in the attack, he said, adding that security forces deployed on the highway immediately retaliated and the militants entered a nearby building.

He said additional security forces were rushed and building was sealed from all sides. Firing continued between the trapped militants and security forces.

Police rescued 22 civilians, including shopkeepers, women and non locals, from the encounter site, he said, adding that intermittent firing continued during the night.

With the first light this morning, security forces entered the building despite firing from militants, Mr Kumar said, adding that earlier it was reported that two LeT militants were trapped in the building.

The IGP said the recovery from militant included one RPF, one AK-47 rifle, four magazines , few grenades and other incriminating material. Security forces averted a major tragedy by eliminating the militant.

He said two security force personnel and as many civilians were injured during the encounter.

‘I congratulate security forces for eliminating the LeT militant who was planning a major strike ahead of Independence Day (ID) on the highway’, he said.

In reply to a question, he said there was a general input that militants could attack security forces on Srinagar-Baramulla and Pantha Chowk –Qazigund highway.

Kumar said security forces have already been put on high alert to foil any militant attempt to cause any disturbance on or before ID celebrations in the Kashmir valley. “I assure people that militants will not be able disturb the ID celebrations in the valley, he said adding people are requested to participate in the functions in large numbers without any fear.