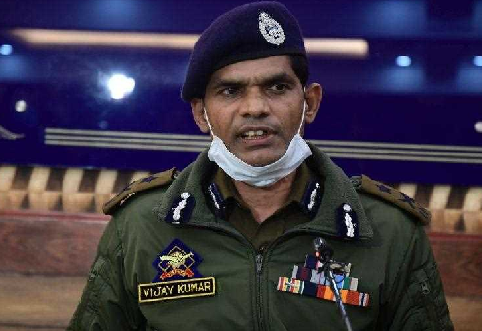 Srinagar, Aug 21 (KINS ) Asserting that anti-infiltration grid has been further strengthen along the Line of Control (LoC) to foil any attempt by militants to enter into this side from Pakistan Occupied Kashmir (POK), Inspector General of Police (IGP) K Vijay Kumar seek the help of general public to share information about any suspect person in their area.

Talking to reporters at Awantipora in south Kashmir, Mr Kumar said only authorized person can comment about the present situation in Afghanistan. He was replying to a question when asked if he apprehend infiltration of Taliban into Kashmir valley after the change in the Afghanistan.

However, as a police officer he can say that any militant sneaking into this side will have to face the security forces. We have strengthen anti infiltration grid to meet any such challenge, he added.

Army and police will jointly foil any militant attempt to cause any major disturbance, Mr Kumar said.

He said there are reports about infiltration of four militants in Bandipora. However, all the four infiltrators were killed in two different encounter, he said adding there are no fresh information.

When asked about the car bomb blast experts and members of hit squad of militants, Mr Kumar said Lamboo, a Pak militant was killed in Pampore and a major car bomb blast was averted. The IED was also defused, he said adding a rocket launcher was also recovered. Killing of Lamboo saved a major tragedy, IGP said adding nine Pakistani militants were killed so far this year.

One of 3 JeM militants killed in encounter with SF was involved in killing of BJP councilor: IGP Kashmir