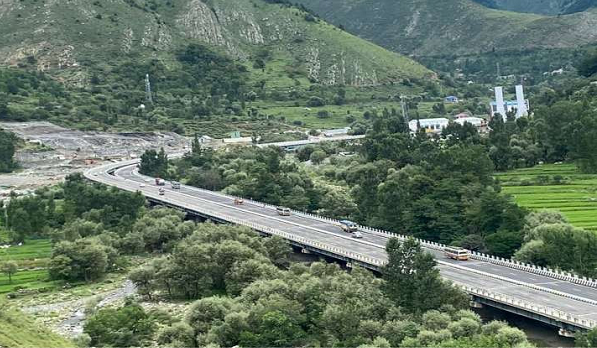 Banihal/Jammu, Aug 23 (KINS ) A minor crack was spotted on the ”macadamized road” of a flyover near the recently opened Banihal-Qazigund tunnel along the 270-km-long Jammu-Srinagar national highway on Monday, prompting diversion of traffic for repairs, officials said.

Traffic movement on the double-tube four-lane tunnel was, however, going on smoothly, they said.

The officials said workers noticed the crack on the stretch between the toll plaza in Banihal and the tunnel early Monday, following which traffic coming from Kashmir towards Jammu was immediately diverted.

“A small patch of the flyover has developed a minor crack which is being taken care of to ensure early restoration of traffic movement,” an official of the Navyug construction company told PTI.

He said it is a minor issue as all the pillars of the flyover are safe.

The 8.5-km-long Banihal-Qazigund tunnel, built at a cost of Rs 2,100 crore, was opened for traffic early this month.

Work on the tunnel, which is part of an ongoing four-lane highway project, was started in June 2011 by the Navyug engineering company, and its operationalisation reduced travel time between Jammu and Srinagar by about 1.5 hours.

23 years after shunning the gun, youths from North Kashmir say it was the ”best decision”

Shehla Rashid booked for sedition over false allegations against Army