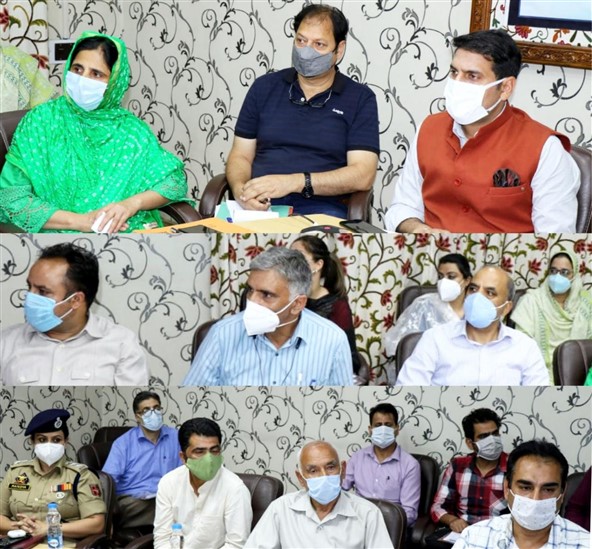 Ban on sale of Cigarettes, OTPs near Educational institutions, Hospitals to be enforced strictly

During the meeting, the DC laid stress on the need of awareness generation among the masses regarding the harmful effects of using Tobacco products. The meeting also discussed threadbare the measures to be taken to curb the menace of smoking.

The DC asked the members of the Committee to work in close coordination so that Tobacco Control laws are implemented effectively on ground across Srinagar.

He directed for strict enforcement of Tobacco Control Laws particularly near Hospitals and Educational institutions and initiated appropriate ‘penal action’ against the defaulters under rules. He further said that Tehsil wise Enforcement Squads will be constituted to monitor the unlawful sale of cigarettes and Other Tobacco Products (OTPs) in Srinagar and curb the menace.

The DC directed the Chief Education Officer and all College Principals to identify the shops within the 100 yards radius of their respective Educational Institutions indulging in unlawful sale of cigarettes and other tobacco products and submit the details of the same for further legal action against the violators.

He said that instances of violation are being reported from the various quarters which have been viewed seriously by the authorities.

On the occasion, State Coordinator Tobacco Control, J&K, Dr Mohammad Naser, highlighted the ill effects of Tobacco usage and implementation of COTPA-2003 through a Powerpoint presentation.

It is worthwhile to mention that the government has ordered to strictly enforce the provisions of the Cigarettes and other Tobacco Products (Prohibition of Advertisement and Regulation of Trade and Commerce, Production, Supply and Distribution) Act, 2003 and Rules. It has also issued instructions from time to time to all the concerned to take penal action against defaulters.

Youth hangs self to death in Ananthnag

In deserted Gulmarg, residents say ‘all is well’