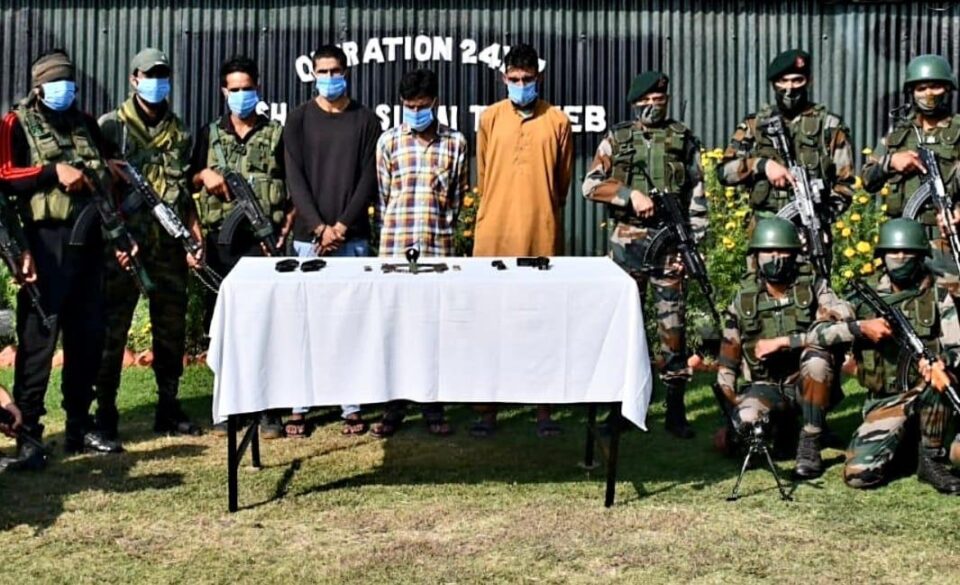 Srinagar, Aug 27  ( KINS ) : Three Over Ground Workers (OGWs) belonging to Lashkar-e-Taiba (LeT) were arrested for their alleged involvement in a grenade attack on a CRPF camp in north Kashmir district of Kupwara.

A police official on Friday said that during the investigation of the case of a grenade attack on CRPF Camp Langate in Kupwara on August 16, police received specific information about the whereabouts of one of the accused.

During the CASO, an OGW, identified as Ishfaq Ahmad Dar was arrested along with arms and ammunition.

On further interrogation, Dar also revealed the names of two more persons, who were involved in the attack. “The joint team immediately raided their residences and arrested the duo, identified as Jamsheed Ahmad Shah and Javed Ahmad Khan, the official said, adding that arms and ammunition were also recovered from them.

“The interrogation revealed that all three OGWs were associated with LeT and were involved in supporting the militant activities and accepted their involvement into the grenade attack on the CRPF camp on August 16, 2021,” he said.

He said all three OGWs have been booked under IPC Section 307 and Explosive Substances Act Section 3/4 of FIR No 260/2021 dated 16 Aug 2021 of Police Station Handwara.

Flower exhibition at Botanical Garden to give fillip to commercial floriculture: Advisor Khan

‘Mungerilal dreamed at night, but Mehbooba does it in the day’, BJP’s Tarun Chugh hits out at PDP chief over her Taliban remarks

JKP on forefront to make its people safe and secure: ADGP Jammu