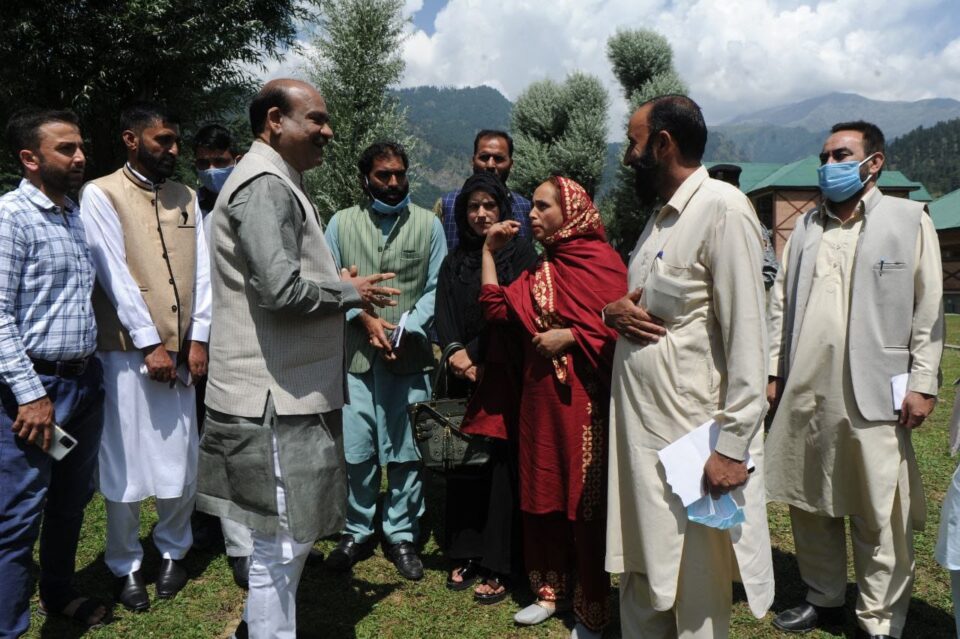 SRINAGAR, AUGUST 30 ( KINS ) : Lok Sabha Speaker  Om Birla, who arrived in Srinagar on 29 August 2021, met with the representatives of District Development Council (DDC), Block Development Council (BDC) and Sarpanchas of Panchayati Raj Institutions of Anantnag District and other nearby areas at Pahalgam today.

Congratulating the newly elected local representatives,  Birla said that the Union Territory of Jammu and Kashmir is on the path of peace and prosperity. The Speaker added that Panchayati Raj Institutions in the UT have been strengthened and appealed to the local representatives for their greater involvement in making the democratic institutions more transparent and accountable.

Observing that the roots of Indian democracy are in our tradition, Birla urged the Panchayati Raj representatives to work towards fulfillment of hopes and aspirations of the people.

Mentioning that decentralisation of power is the key to success of democracy and development, Birla called for greater coordination among administration and Panchayati Raj Institutions so that the fruits of development reach the intended beneficiaries. In this regard, Shri Birla stressed on the importance of consensus and dialogue and said that all democratic institutions must interact among themselves and they should also device a set of rules and procedures for structured functioning.  Birla also said that Gram Sabhas should meet regularly to address people’s issues.

Stating that Jammu and Kashmir has tremendous potential for tourism and export,  Birla called for measures for boosting marketing and export of local handicrafts and artifacts in national and international markets.

The Panchayat representatives lauded the initiative of  Birla for his historic visit and said that the visit of the Lok Sabha Speaker would boost democracy at the grass roots level.

The Parliamentary Outreach Programme for the Empowerment of Panchayati Raj Institutions is a unique initiative of the Lok Sabha Speaker, Shri Om Birla. A first of its kind Programme, it is intended to strengthen the institution of governance and planning at the grass-root level.

The third such programme in the series was recently organized for the grass root level institutions of the Union Territory of Ladakh on 27 August, 2021. Around 195 number of Panchayat representatives attended the programme.

The fourth such programme is scheduled to be organized for the Union Territory of Jammu & Kashmir on 31 August, 2021 at Srinagar. The theme of the programme is “Parliamentary Outreach Programme for the Empowerment of the Panchayati Raj Institutions”. Around 100 Panchayat representatives will physically attend the programme and many others will join online via weblink.

The broad objectives of the Programme are:-

iii. Creation of sense of ownership of the assets that have been created

Birla will visit Gulmarg to meet the Panchayat representatives on 1 September 2021.