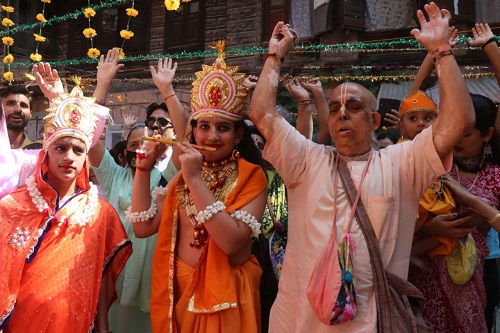 Srinagar Aug 30 (KINS): After two years, Kashmiri Pandits on Monday celebrated Janmashtami on the streets of the valley with religious fervour and gaiety.
The Janmashtami processions organised by Pandits passed through streets in several parts of Kashmir.
The processions could not take place in 2019 post abrogation of Article 370 then in 2020 due to COVID in the valley.
Members of the Kashmiri Pandits including women and children were seen visiting temples since morning to join special prayers.
According to news agency Kashmir Indepth News Service (KINS), the Pandits on Monday also took out the procession from Ganpatyar temple of Lord Ganesha in Habba Kadal and passed through Zaindaar Mohalla, Jehangir Chowk, Gantaghar, Moulana Azad Road to Residency Road Srinagar.
The celebration of the Krishna Janamashtami with religious fervour and gaiety has been reported from other parts of Kashmir.
Men and women were chanting ‘Ram Ram Hari Ram, Hari Krishna Hari Ram.”
Both men and women of Kashmiri Pandits were seen dancing. Members from the Muslim and other communities greeted Kashmiri Pandits.
The Muslims were also seen participating by showering flower petals and providing every assistance in the smooth conduct of procession by the Kashmiri Pandit community.
A Kashmiri Pandit, Aparji Yogi, who was part of the procession said they celebrated the Janmashtami on streets of Srinagar due to support of Muslims.
“The majority community in Kashmir had decorated their streets. We hope this brotherhood will continue forever. People from all religions live here united,” he said.
A Kashmiri Pandit youth said the procession was an open invitation to their migrant brethren to return to their homeland.
“Kashmir is known for brotherhood across the world. Outsiders should come here and see our brotherhood. We received good support from the administration and the locals,” he said.
Such processions were also taken out by Kashmiri Pandits in several parts of the valley including in North Kashmir’s Handwara where they were praising Lord Krishna. They also prayed to God to end Corona.
The administration had made tight security arrangements to ensure there was no trouble.
Lieutenant Governor Manoj Sinha has extended his heartiest greetings on the auspicious occasion of Shri Krishna Janamashtami.
In a message, the Lt Governor said the festival reinforces the belief that a life of morality and righteousness can be achieved amidst all difficulties through devotion, selfless service, commitment and compassion.
“May this Janmashtami strengthen our faith in the goodness of mankind, inspire us to lead a virtuous life and usher in happiness, prosperity and well-being of all. We should renew our commitment to Lord Krishna’s ideals on this occasion,” Lt Governor added.
Former chief ministers Omar Abdullah and Mehbooba Mufti greeted people on the occasion. (KINS)

Decentralization of power is key to success of democracy and development: Birla