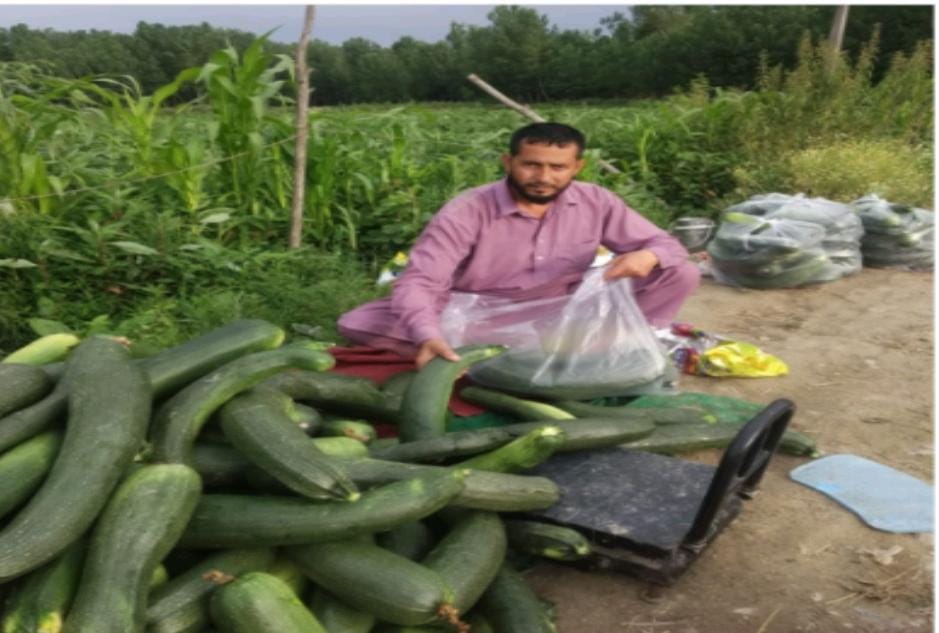 Supplies vegetables to National Market at Delhi, Ladakh besides catering to local market

SRINAGAR, SEPTEMBER 01 ( KINS ) : As the District Administration, Srinagar strives to handhold the aspiring unemployed youth and provide job opportunities to them in Srinagar district under various Government schemes, the Deputy Commissioner (DC) Srinagar, Mohammad Aijaz Asad today said that concrete measures are being made with focused attention to provide job opportunities to the unemployed youth in Srinagar.

The DC said that thrust is being given on making youth job providers instead of job seeker. He said among such initiatives a conducive ecosystem is being created to support farmers’ hard work so that the farmer gets optimum returns on a sustainable basis.

A youth namely Bashir Ahmad aged 45 years is from Maloora village in the outskirts of district Srinagar. He is a matriculate and owns 20 Kanals(1 Ha) of irrigated land. He deals in commercial cultivation of different types of hybrid/ local vegetables like Tomato, Capsicum, Chillies, Squash, Bottle gourd, Cucurbits etc.

While attending an awareness camp at Maloora conducted by Agriculture Production and Farmers Welfare Department Kashmir, Bashir Ahmad got an idea about high yielding varieties of vegetables and their cultivation on scientific lines and vowed to follow the guidance imparted by the officers/officials of the department, and today he is a happy man.

The said progressive vegetable grower of Maloora not only earns his livelihood with dignity, but also provides employment to 12 persons, mostly women from his neighborhood

Earlier, Bhat was having know-how of only subsistence agriculture, but later due to the intervention of officers/officials of the department, he shifted to commercial cultivation of different types of vegetables.  While as the progressive farmer earned 9 lakh in the year 2019, the revenue generated from his field touched  Rs 12.5 lakh in the current year.

At present he supplies vegetables not only to the local market, but caters to the National market at Delhi and Ladakh. His produce has reached outside Mandies fetching him good returns, and thus improving his socio-economic status. Many local vendors reach his field on a daily basis and procure vegetables from Bashir Ahmad on daily basis to earn their livelihood.

Bashir Ahmad Bhat is a hard working farmer and has been quick to adopt the latest technology developed by the department. He is well versed with different techniques of plant protection without using chemicals and his aim is to convert his produce to organic in a gradual way, and for which he is in close contact with the field functionaries of the department.

According to Bhat, he not only deals in commercial cultivation of vegetables but also grows seedlings of different types of vegetables hybrid/ local and sell these to local growers and thus gets additional income.

He also produces seeds of kale, knolkhol etc and sell it to the needy farmers.

Bhat is an inspiration for those unemployed youth who run from pillar to post for getting government jobs, as he provides livelihood to 12 persons daily which accounts to creation of 360 man-days a month and each person earns Rs 12,000 per month