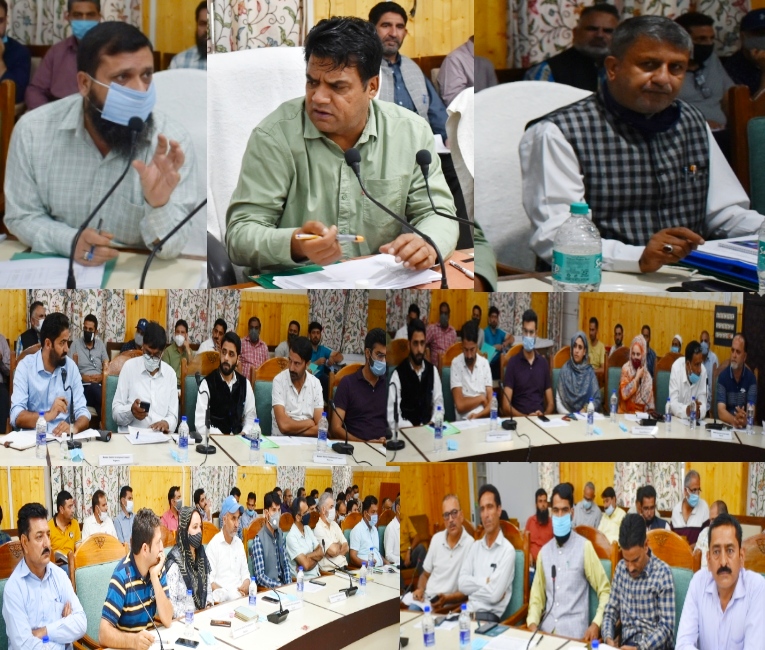 KUPWARA, SEPTEMBER 07 ( KINS): A joint meeting of Officers and PRIs was today held at conference hall DC office Kupwara to review the progress of Implementation of District CAPEX Budget (DCB), 2021-22 of Kupwara district.

The objective of the meeting was to review the pace of progress under District Capex Budget, speeding up of estimation of works, tendering and Administrative Approval.

Addressing the meeting the Chairman DDC stressed upon the officers to speed up the process of estimation of works so that execution of works could be taken up in hand and completed within the targeted time frame. He said the council members have got the mandate from the common people of the district and therefore have to work jointly for overall development of the district.

Speaking at the occasion, the Vice Chairman DDC said that they belong to a system as such are responsible to serve people in a better way. He stressed upon the engineers of the Rural Development department to speed up the estimation of the works.

The Deputy Commissioner Kupwara, Imam Din in his address said that the District Administration is here to remove the bottlenecks and resolve the problems confronting in the field, adding that all field functionaries should redouble their efforts to come up to the expectations of the PRIs.

He gave a timeline of 4 days to all AEEs and JEEs for submission of estimates directly to the Deputy Commissioner’s Office for administrative approval so that tendering process could be started and works taken in hand on time.

He expressed his dismay over the poor performance of some officials and asked the controlling officers to fix the responsibility upon the officials who are found lazy in submission of estimates.

The Deputy Commissioner asked ACP to constitute various Standing Committees of Council members on behalf of the Chief Executive Officer so that the progress of the development works could be properly reviewed and monitored in the district.

Earlier, Joint Director Planning, Abdul Majeed gave a brief about the progress and informed that 5815 works are targeted for the current financial year under District Capex 2021-22. He said Rs. 56.78 crore have been expended till ending August 2021 against the released amount of 132.65 crore.

The concerned DDC members and BDC Chairpersons also spoke in the meeting and got information regarding estimates and other developmental works of their respective constituencies from the concerned officers.

DC B’pora appeals students to get vaccinated before classes resume

Ahead of Eid, FCS&CA intensifies Market checking in Srinagar

She Wasn’t An Informer,’ Says Family Of Kashmiri Woman Executed On Video