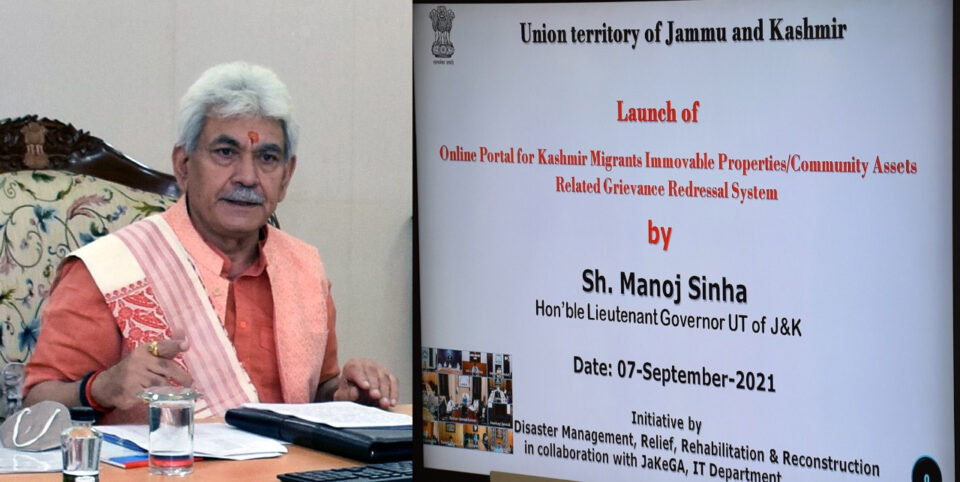 The Kashmir migrants can log in to http://jkmigrantrelief.nic.in/ or http://kashmirmigrantsip.jk.gov.in to submit their complaints, an official spokesman said.

The application filed on the portal will be disposed of in a fixed time frame under the Public Services Guarantee Act, 2011, by the revenue authorities under intimation to the applicant, he said.

“The competent authority (Deputy Commissioner) shall undertake survey/field verification of migrant properties and update all registers, within a period of 15 days and submit compliance report to the Divisional Commissioner, Kashmir,” he added.

Speaking on the occasion, the Lt Governor said the initiative will put an end to the plight of the migrants including Hindus, Sikhs and Muslims, who have been suffering since 1990s.

“I met numerous delegations from across the religions in the last 13 months and they unequivocally supported the return of migrants,” he said.

“It is the responsibility of the present to rectify the mistakes of the past. While laying the foundation for a bright future, this is also the time to heal the old wounds. I request all citizens to support the administration in this effort and set a new example of brotherhood,” Sinha said.

Nearly 60,000 families migrated from the valley during the turmoil, out of which approximately 44,000 migrant families are registered with the Relief Organisation, J-K, whereas the rest of the families chose to shift to other states and UTs, the spokesman said.

The hapless migrants had to leave behind their immovable as well as movable properties, the LG said.

“During the trial run period of the portal, we have received 854 grievances. It clearly shows a large number of migrant families were awaiting justice. Now, the time-bound action on complaints will not only restore the faith of people in the system but I believe thousands of families achieve closure, justice and regain their dignity,” the Lt Governor said.

It is pertinent to mention that with the onset of the Pakistan-sponsored terrorism in Jammu and Kashmir in 1989-1990, a large number of people had to migrate from their ancestral places of residence, particularly in the Kashmir division, the spokesman said.

There was a mass exodus of Kashmiri Hindus as well as a number of Sikhs and Muslim families. Under compelling circumstances, the immovable properties of these migrants got either encroached or they were forced to sell their properties at throwaway prices, he said.

In order to address this issue, on June 2, 1997, an act namely “The Jammu and Kashmir Migrant Immovable Property (Preservation, Protection and Restraint on Distress Sales) Act, 1997” was enacted, he said.

This act provides preservation, protection and restraint on distress sales of the immovable property of the migrants.

Mehbooba Mufti says she is under house arrest

In times of Covid-19, Qamarwari shopkeeper comes to rescue of consumers