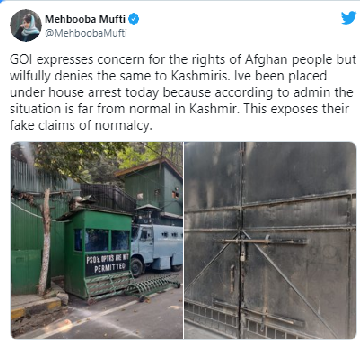 Srinagar, Sept 7 ( KINS ) : PDP president Mehbooba Mufti on Tuesday claimed that she has been placed under house arrest, and said the move has exposed the government’s claims of normalcy.

The former Jammu and Kashmir chief minister also posted on Twitter pictures of a security force vehicle blocking the main gate of her Gupkar residence here.

“Ive (I have) been placed under house arrest today because according to admin(istration) the situation is far from normal in Kashmir. This exposes their fake claims of normalcy,” she tweeted.

She also hit out at the Centre alleging that while the Government of India was expressing concern for the rights of people in Afghanistan, the same were denied to Kashmiris.

“GOI expresses concern for the rights of Afghan people but wilfully denies the same to Kashmiris,” the PDP leader charged.