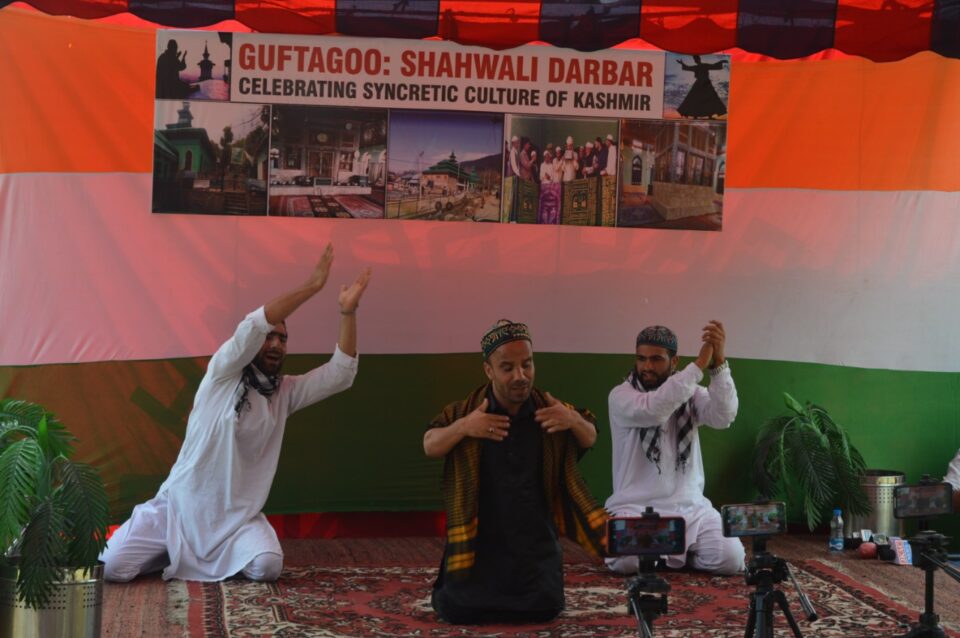 Srinagar, 09 Sept ( KINS ) . In continuation of the Mega Events and celebration of Jashn-E-Azadi a Guftagoo was conducted on the Syncretic Culture of Kashmir at Muqam Shah Wali, Drugmulla on 09 Sep 2021. The program was a grand success with almost 800 people being attending it. The Festival comprised of a very healthy discussion on Sufism, Cultural traditions of Kashmir, teachings of Syed Zati Shah Wali and the way ahead for a peaceful and syncretic culture in Kashmir. Noted and learned speakers, from in and around Kashmir were also invited, and gave very enlightening speeches.

The programme’s highlight was the participation of the two panchayats of Muqam Shah Wali. The event also had two powerful performances of Qawwali and by Sufi singers from Kupwara. The Guftagoo dwelled upon various facets of Sufism and its impact and role in the Kashmiri culture.

The arrival of Sufism in Kashmir greatly impacted the society and polity of Kashmir. Moreover, Sufi saints in Kashmir while cementing the Islamic belief system in the Valley, worked assiduously to build a society that espoused the cause of inter-faith harmony. The rise of a pluralistic cultural order in the Kashmir Valley was a by-product of the positive influence of Sufi saints in Kashmir as the inherent eclecticism of Sufi practices within Kashmir, richly influenced the lives of ordinary people in the Kashmir Valley. Thus, Sufism as an ideology promoted the creation of a composite culture in Kashmir.

Non Local employee of HCC dies due to suffociation in Bandipora