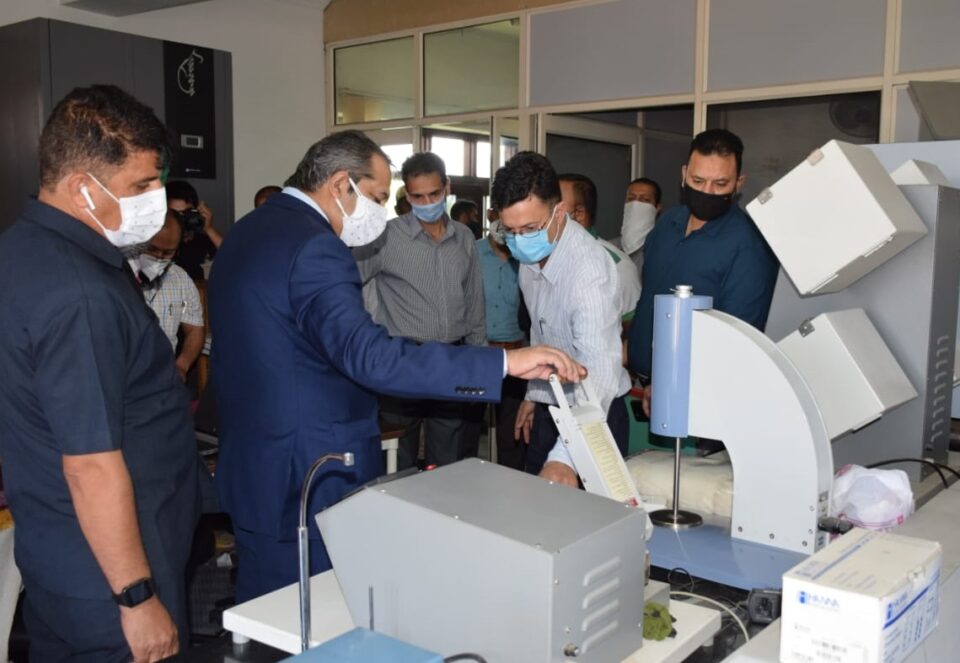 During his visit to IICT, Advisor interacted with the Junior/Senior Craft instructors of Handicrafts and Handloom Department who are undergoing Skill Up-gradation and Capacity Building Training at the Institute. Advisor also interacted with another group of Handloom weavers who are undergoing Skill Up-gradation Training organized by Silk Technical Services Centre (STSC), Central Silk Board, Jammu in association with IICT to upgrade their skill and give them necessary inputs on designing and other related subjects.

Speaking on the occasion, Advisor said that the skill development  is important for exposing the artisans to the newer techniques and adopting latest designs  to cater to the new market trends. He said that weavers should be made aware of the blending technique of pashmina and silk.

Advisor was informed that the introduction of Jacquard and Dobby techniques will be beneficial for the weavers and will be helpful to modify the designs for better returns and customer satisfaction.

While reviewing the progress of Testing, Certification and Labelling of Hand-knotted Carpets under Geographical Indication of Goods Act, the Advisor was informed that orders for testing equipments and other related items have already been placed by the Institute and Development of Cloud Based QR Code Management System is also in progress.

It is pertinent to mention here that IICT shall be introducing QR Code mechanism, first of its kind in the Country, for the purpose of Testing and Certification of Hand-knotted Carpets produced in Kashmir under Geographical Indication of Goods Act 1999. This QR Code along with ‘GI’ logo shall be printed on a unique destructible label. By virtue of this QR Code mechanism, the customer would be able to check and verify requisite details of carpet with the help of Smart Phone before purchasing the same just to confirm its genuineness/authenticity   along with other related parameters of carpets. A brief Power Point Presentation on the overall working of QR Code mechanism and its features was also made by the Institute.

Advisor said that the QR code will go a long way in checking the machine made and fake goods that are being sold in the name of Kashmir craft. He said that customer satisfaction should be the motive of the department and every effort should be made so that only genuine craft is sold.

He further added that Kashmir enjoys a prominent position on the world map of exports. However, over the past few years, machine made and fake goods are being sold in the name Kashmir handicrafts which are detrimental to the future of the craft sector. He said that the introduction of QR code will facilitate the artisans and weavers to avail testing, certification, and labelling facility for authentication of pashmina products.

To ensure long term survival of the Kashmir craft sector, Advisor said that QR code will go a long term in this direction and will restore its exclusivity, elegance and traditional splendour for which it is known internationally.

The Advisor also directed the officers to promote and publicize this technique so that the message reaches to every potential customer and they will adopt this technique while purchasing.

During his visit to Pashmina Testing Laboratory, Advisor was briefed about its overall working which was recently transferred to Handicrafts and Handloom Department (Kashmir), Advisor was given demonstration on functioning of different equipments of the centre.

He took a first hand account of the process of testing of the fibre up to the end product. He directed the officers to follow the entire process meticulously so that only genuine craft reaches to the customer.

It is important to mention here that Pashmina Laboratory is first of its kind in the country, which is conducting testing of GI certified Pashmina Shawls. The Advisor was apprised that Up-gradation of Pashmina Laboratory has been initiated by way of procurement of OFDA, SEM and other sophisticated equipments necessary for catering to the huge demand of testing and certification of Pashmina Shawls under GI Act.

During his interaction with Directors and other officers , Advisor was intimated that Minimum Support Price for GI certified Pashmina Shawls and Hand-knotted Carpets has been fixed by the Committee constituted by the Government for the purpose and the same has recently been notified for strict implementation in letter and spirit.

Advisor while appreciating the efforts of the department said that these landmark decisions will not only go a long way in reviving these important sectors but will also improve the income level of concerned weavers significantly and their interests will be protected through the authentic trade.

J&K to receive moderate rain during next 24 hours