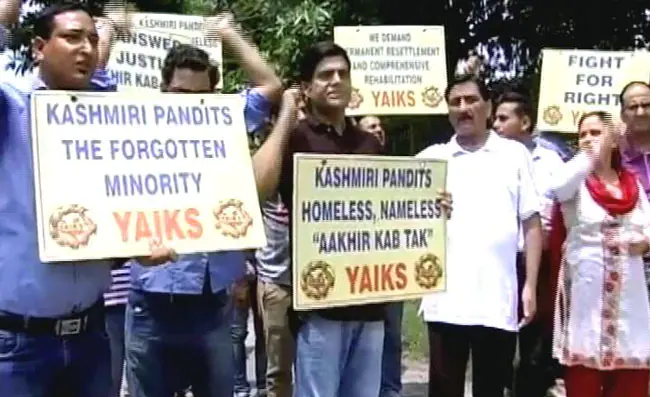 Srinagar, Sept 15 ( KINS ) ; Every Hindu living in the Kashmir Valley is not a Kashmiri Pandit and cannot get the benefits of special job schemes meant for members of that specific community, the Jammu and Kashmir High Court has said in a recent judgment.Dismissing a plea seeking to include some Hindu groups and Sikhs into the Prime Minister’s job package for Kashmiri Pandits, the court said the targeted group is a “separately identifiable community distinct from other Hindus residing in the Valley like Rajputs, Brahmins other than Kashmiri Pandits, Scheduled Castes, Scheduled Tribes, and many others,” said Justice Sanjeev Kumar in his judgment on Tuesday.

The petitioners had argued that other Hindu groups, besides the Sikh community, too, had suffered much and ought to be considered for benefits similar to the ones extended to non-migrant Kashmiri Pandits.

The court, however, said the argument that they can be grouped together as Kashmiri Pandits was “preposterous and cannot be accepted”.

“There is no denying the fact that in common parlance, Kashmiri Pandit is a community of Kashmiri-speaking Brahmins living in the Valley for generations and are distinctly identified by their dress, customs, and traditions,” the judge said.

“It is, thus, difficult to accept the contention of the learned counsel for the petitioners who are mostly Kshatriyas, Rajputs, Scheduled Caste, non-Kashmiri Brahmins (that they) should be treated as Kashmiri Pandits and admitted to the benefits of the Prime Minister’s revised package for return and rehabilitation of Kashmiri migrants.”

The only question that remains to be determined is whether the petitioners, who are, admittedly, not Kashmiri Pandits but belong to other Hindu castes, can be brought within the definition of ‘Kashmiri Pandits’, according to the judgment.

In 2009, the then Prime Minister, Manmohan Singh, had rolled out a Prime Minister’s “package” aimed at facilitating the return and rehabilitation in Kashmir Valley of Kashmiri migrants.

Under the scheme, 6,000 government jobs were announced for migrants Pandits. While 4,000 posts have already been filled, 2,000 were recently advertised by the Jammu and Kashmir Service Selection Board.

Under a revised package announced last year, the government reserved the jobs for Pandits who have not migrated from Kashmir. Such candidates are required to produce certificates of “non-migration” issued by the concerned Deputy Commissioners.

The Deputy Commissioners, however, refused to issue such certificates to non-Kashmiri Pandit Hindus.

The aggrieved groups then filed a petition before the High Court seeking inclusion in the package saying it cannot be restricted to only one set of beneficiaries.

The petitioners said the term “Kashmiri Pandits”, used in SRO 425 of 2017, was wide enough to include all non-migrant communities and Hindu castes residing in the Kashmir Valley and have “equally suffered as non-migrant Kashmiri Pandits”.         (SOURCE  ND TV )

Try to win hearts rather than using threats & sticks to silence people: PDP chief to BJP