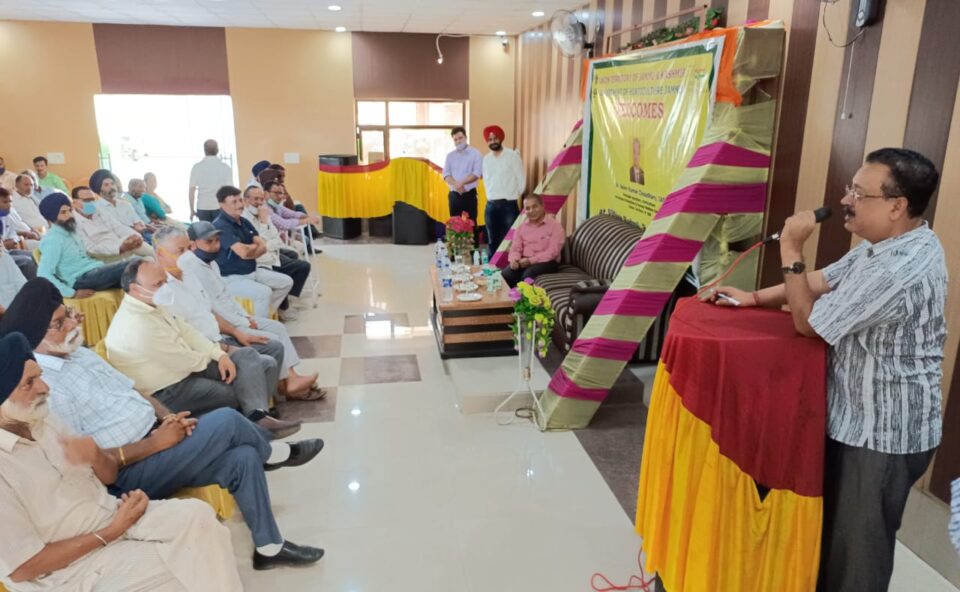 Navin asked the farmers to adopt diversification of crops in their fields so that they can earn throughout the whole year. He informed them that apart from apple, ultra high density plantation of sub-tropical fruit crops like mango, citrus, guava and litchi was also introduced in Jammu division this year. He said that apart from these fruit crops, the department and the farmers should also lay thrust on cultivation of exotic fruit crops especially dragon fruit.

He further informed that the department is going to establish first of its kind, Mega Horticulture Nursery at Chakroi, R. S. Pura, in 805 kanal of land which will produce High Density Fruit Plants thus catering to the demand of farmers of Jammu division. He impressed upon the farmers to sell their produce through e-commerce thereby getting rid of exploitation by middlemen, ultimately enhancing their income manifold.

He stressed upon the officers to cover 200 acre of land with plantation of fruit crops in clusters as there is great potential for Horticulture in the area. He added that the process for formation of FPO should be initiated so that after 2-3 years the farmers can get good returns after proper value addition of their produce.

Further, Principal Secretary handed over the keys of Farm machinery including Tractors, Power Tillers besides distributing sanction letters of Custom Hiring Centres among the beneficiaries.

Director Horticulture apprised the Principal Secretary of progress being made in respect of plantation in sub tropical areas of Jammu division. He informed that for the first time in Jammu division 1600 guava fruit plants are being planted in 20 kanal of land of farmer Sukhdev Singh.

‘I have not been forced to self-quarantine, reports false’, says Dr. Farooq Abdullah

Fresh spell of rain in J&K from July 19: MeT