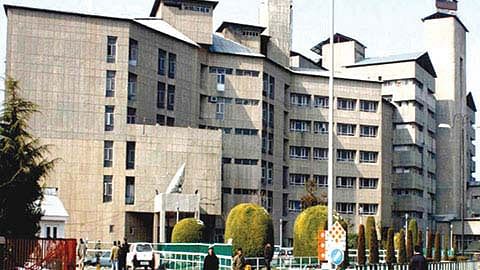 “Orders have been placed for procurement of drugs”, says Medical Superintendent

Srinagar Sep 17( KINS): The Sher-I-Kashmir Institute of Medical Sciences (SKIMS) Soura may be valley’s premier health institute but it is running short of medical supplies where patients even have to purchase syringes and drip sets from the market.
The drug shortage began when authorities framed a committee for procurement of drugs and equipment in June this year but failed to complete the process. The committee was formed after Dr A G Ahangar was given a six-month extension whose five-year term as Director SKIMS ended on June 25.
“Several life saving drugs are not available here for the last several weeks and could cost the life of a patient. People have to purchase everything on their own from the markets. It does not seem to be the premier hospital of Kashmir where there is even non-availability of syringes and drip sets,” a senior official told news agency Kashmir Indepth News Service (KINS).
He said the committee has failed to procure drugs and some medical equipment for the last few weeks.
“There is a crisis-like situation as the Director is not able to take any decision since his extension. The patient care is badly hit here for the last several weeks,” the official added.
The official said that it was for the first time there is such a shortage of drugs here.
Established in 1982, Kashmir health care is largely dependent on SKIMS where thousands of people visit daily for the treatment.
However, these days, the premier health institute of Kashmir is running short of medical supplies and many life saving drugs have already been exhausted.
“My uncle was admitted to SKIMS last week. We had to purchase every medicine including Metrogyl and Pantop injections besides syringes from the market. We were told all these drugs are not available at the SKIMS,” an attendant of a patient said.
Medical Superintendent SKIMS Soura Dr Farooq Jan admitted shortage of drugs at the hospital.
“The rate contracts had expired. The tendering process took some time. Now orders have been placed for procurement of drugs. Some drugs have been received while others will come in a few days,” he told KINS. (KINS)

Flu vaccine in times of Covid crisis more important than ever: DAK

‘Closure of Parks, Gardens’, you will know till evening: Com Secretary Floriculture