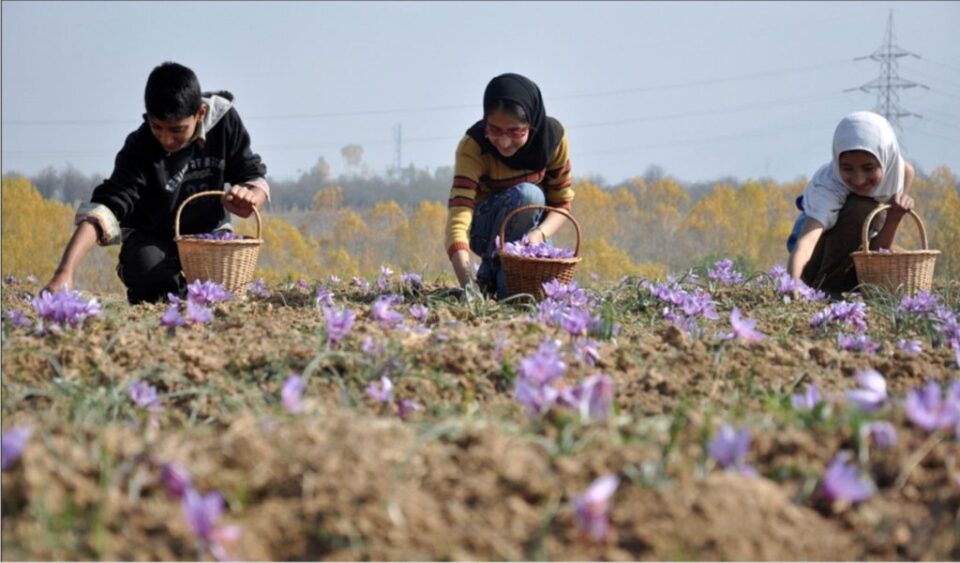 Srinagar Sep 18 (KINS): Saffron growers in Kashmir say that Geographical Indication (GI) tag has stopped the low quality Iranian saffron from entering into markets and benefited farmers of the valley.

In May last year, Kashmiri saffron was given a Geographical Indication (GI) tag with the aim to make it illegal for someone outside the valley to make and sell a similar product under the ‘Kashmiri saffron’ name.

GI tags are indications which identify a product as originating in that territory, where a given quality, reputation or characteristic of the product is essentially attributable to its geographic origin.

While Kashmiri farmers say that GI tag has immensely benefited them since last year.

Bashir Ahmad, a saffron grower from Pampore in South Kashmir’s Pulwama district said during 2019 he sold each kilogram of saffron Rs 1.40 lakh.

“But last year, we sold each kilogram for Rs 1.80 lakh and earned around Rs 5.5 lakh through saffron. This all is because of GI tagging as it has increased the value of Kashmiri saffron in world markets,” Ahmad told news agency Kashmir Indepth News Service (KINS).

The Kashmiri saffron is considered the best in the world due to its flavor, colour and aroma.

But the high grade Kashmiri saffron has been hit by adulteration, mixed with the cheaper Iranian variety and being sold across the world. For an ordinary person, it becomes difficult to recognize Kashmiri saffron resulting, its value has degraded.

Three-to-four kanals of land produce one kilogram of saffron.

In Kashmir, three districts – Pulwama, Budgam, Srinagar grow saffron. Among them, Pulwama district’s Pampore has earned the title of Kashmir’s ‘saffron town’ for growing the highest and best quality saffron.

The soil quality in this area is highly suitable for its cultivation.

“The GI tagging has really helped us. A laboratory has also been set up in Pampore where a proper check is being made only then Kashmiri saffron is being exported with GI tag. The rates of each kilogram have gone up from Rs 1.30 lakh in earlier years to over Rs 1.80 lakh since last year due to GI tagging,” another saffron grower Mehraj Ahmad said.

More than 16,000 families are associated with saffron production in Pampore. (KINS)

One Chickenpox Case detected in Shopian