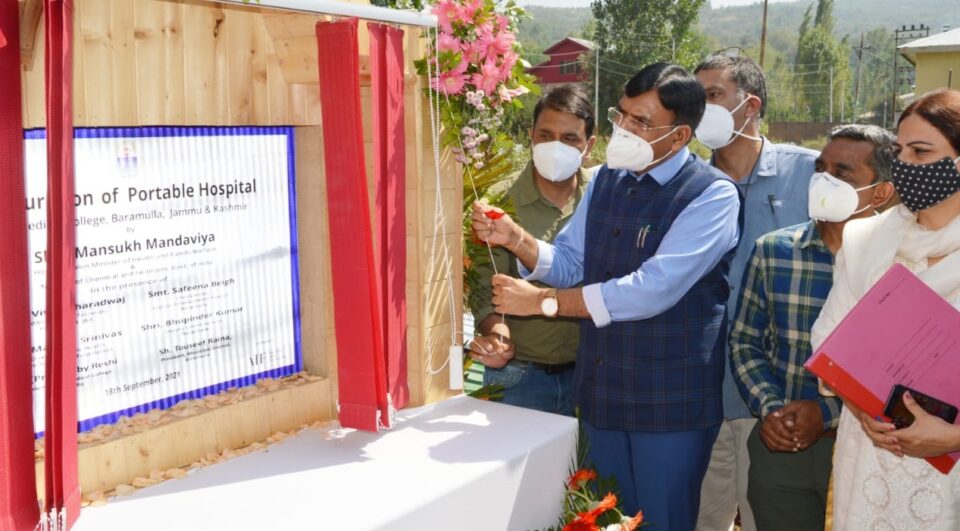 Srinagar , Sept  18 ( KINS: Terming the upgradation of existing healthcare infrastructure as a pre-requisite for a healthy nation, Union Minister for Health & Family Welfare, Chemicals and Fertilizers,  Mansukh Mandaviya today asserted that good health of citizens and development of a nation go hand in hand as they are implicit and work together. He added that indicators of health care play a pivotal role in upgrading and developing the parameters of socio-economic development adding that some novel measures are being taken in this regard.

The Minister made these remarks during his visit to Baramulla district as part of the Union Government’s public outreach programme which aims to evoke public feedback pertaining to developmental concerns.

Reiterating upon the GoI’s commitment to develop the healthcare architecture in J&K, i Mandaviya said that present dispensation led by Prime Minister Narendra Modi is very keen to provide efficient and inclusive health and medicare services to the people with special focus on economically weaker and downtrodden sections. He added that establishment of Government Medical Colleges and AIIMS facility in the UT will give a major fillip to the existing healthcare system.

Quoting the centrally sponsored Ayushman Bharat Scheme, the Minister informed that over two crore people have benefited in the last three years as the scheme provides free secondary and tertiary care hospitalization upto Rs 5 lakh every year. He said that costly health care services is one of the reasons of abject poverty as a large chunk of our income is spent on it.

The Minister further said that the initiation of health insurance was an evolutionary step taken in health sector and budgetary allocation in health sector is being enhanced significantly every year based on aspirations of the people. He assured that every possible initiative on the part of Union Government shall be taken to upgrade and develop the basic infrastructure in our health institutions.

Later, the minister chaired an interactive meeting with DDC members, BDC Chairpersons, MC presidents and PRIs and listened to their developmental aspirations and concerns.

The Minister gave a patient hearing and expressed happiness over the meeting held with the PRIs. He said that Union Government has a good dream for development of Jammu and Kashmir, adding that the present out-reach programme has been initiated by the Government to know the basic problems of the people at the ground.

He assured that the demands and grievances projected by the delegations have been taken note of and the same would be put up with appropriate authorities for timely redressal.

The Minister said that people of J&K are hardworking and different programmes and schemes have been launched in order to tap this potential. He extended congratulations to the PRIs for successful establishment of de-centralized system and said that present government is working to strengthen the PRI mechanism with more financial autonomy. Moreover, he emphasized upon them to identify their role and co-operate in taking the spectrum of development to the apex.

Enlisting various interventions that have been taken in farming sector,  Mandaviya said that initiatives were taken to provide direct financial support to the farmers so that they became capable enough to purchase farming inputs properly. He urged to adopt organic and sustainable farming adding that it can explore new avenues and opportunities.( KINS )

The Lockdown when people, Govt are on same page in Kashmir