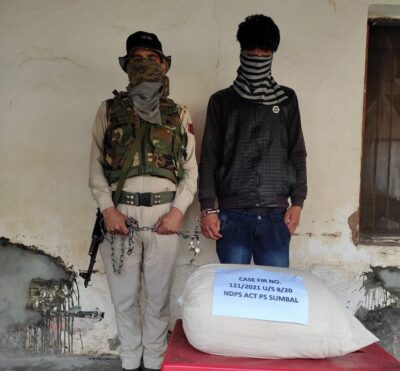 Srinagar , Sept 21( KINS ): Continuing its efforts to eradicate the menace of drugs from the society, Police have arrested a drug peddler in Bandipora and recovered contraband substance from his possession.

Acting on specific information, a Police party from Police Station Sumbal under the supervision of SDPO Sumbal Shri Surinder Mohan- JKPS at a checkpoint established at Sumbal Wangipora Bala intercepted a person identified as Sameer Ahmad Dar son of Abdul Hameed Dar resident of Rakh-i-Shilvat Sumbal. During checking, officers were able to recover 3Kgs of dry bhung leaves from his possession. He has been arrested and shifted to Police Station where he remains in custody.

Accordingly, a case vide FIR No. 121/2021 under relevant sections of law stands registered at Police Station Sumbal and further investigation into the matter has been initiated. During preliminary investigation it surfaced that the recovered drugs were meant to be supplied among the youth of the area to make them drug addicts.

ur consistent actions against drug peddlers should reassure the community members that we are making efforts to keep our society free from the scourge of drug menace.

300 identified encroachments to be removed in Srinagar: Shahid Choudhary

Article 35 A sacred and sacrosanct