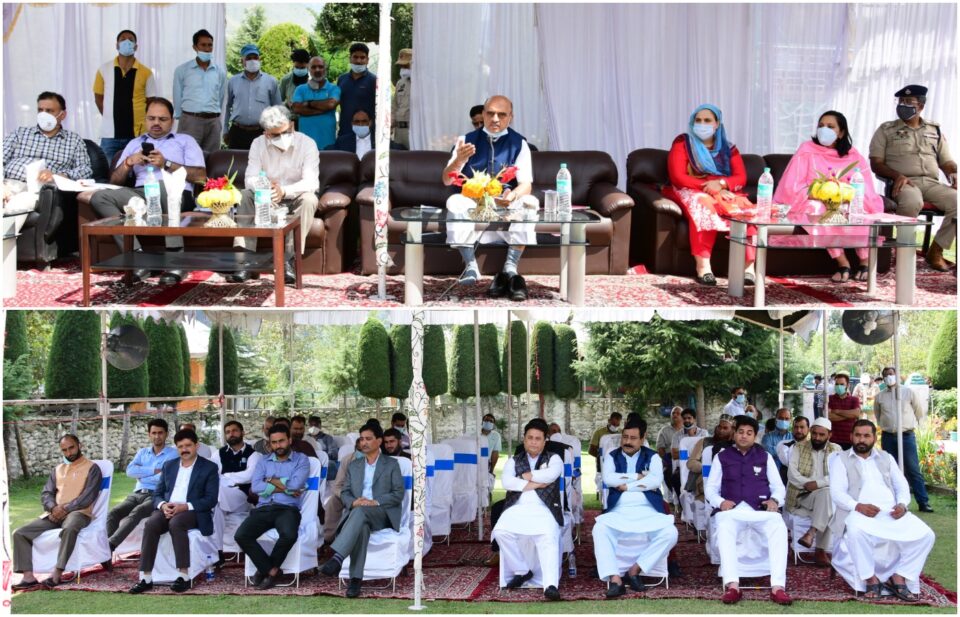 The Political parties which met the Minister included Apni Party, District Congress Committee, BJP, National Conference and J&K Panthers Party who apprised the Minister about the issues and developmental needs in their areas.

While, interacting with the political representatives, the Minister said that Jammu and Kashmir is the crown of the country and Central Government is focused to provide every support to the administration in its endeavours for overall development of the UT.

Replying to issues and developmental needs raised by the political party representatives, he maintained that Prime Minister has directed all the Central Ministers to visit the UT with the purpose to interact directly with people and elected bodies to ascertain the needs of the locals at grassroot level so that the same may be fulfilled in a better and effective manner.

Later, the Minister handed over cheques among beneficiaries worth Rs 4.06 lakh under Chronic Disease Assistance and Education Assistance of Labour Department.

Meanwhile, the Minister also distributed aids and appliances including wheel chairs, CP chairs and hearing aids among Children with Special Needs (CWSN) and handed over keys of commercial vehicles under MUMKIN Scheme among beneficiaries.

While interacting with the beneficiaries, the Minister said that Union Government is determined to ensure welfare of all sections of the society in the UT and in this regards various financial assistance schemes have been launched in J&K. He added that launching of these schemes is in line with PM Narendra Modi’s call for ‘Sabka Saath, Sabka Vikas, Sabka Vishwas’ mantra.

On the occasion, Dr. Karad was informed that with this addition, the number of business units in Ganderbal district has reached 24.

The minister lauded the J&K Bank for extending its banking and financial services in such unconnected area where people can now avail finance and other services of the Bank, especially the government sponsored schemes, which are tailored to create more employment opportunities for the educated youth, he added.

Speaking on the occasion, the Minister said that it is the dream of Prime Minister that benefit of every scheme reaches to every individual especially those who live in such tough terrain and far flung areas and hoped that said business unit would play a vital role in the development of the area.