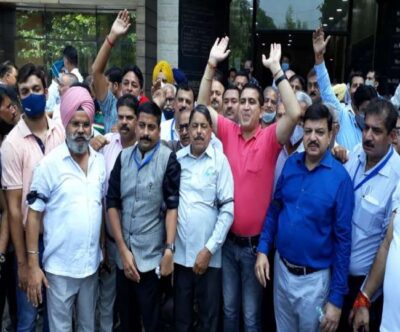 Jammu , Sept 22 ( KINS )  Jammu bandh call given by the Jammu Chamber of Commerce and Industries (JCCI) evoked a massive response impacting normal life across the Jammu region on Wednesday.

Protests and rallies were taken out at various places of the region for the first time after the abrogation of Article 370. Though some sections of Jammu had supported the abrogation of Article 370, they are now angry over various decisions of the government including new excise policy, new regulations on bars and restaurants, the closing of the 149-year-old practice of Darbar Move, new Geology and Mining policies, restrictions on banquet halls and proposed opening of a chain of Reliance Retail stores. The JCCI said all these moves have disturbed Jammu trade adversely.

In almost all districts of the Jammu region markets wore a deserted look with shops and business establishments including chemist shops remained closed. The public and private traffic were also off the roads. The strike, which got support from almost all political parties except the BJP, remained peaceful with no untoward incident reported from anywhere. As the high court bar association, Jammu supported the call the work in courts remained affected.

The Chamber of Commerce and Industry (CCI) Jammu on Wednesday expressed gratitude towards people of Jammu province especially the trader fraternity and Jammu High Court Bar Association and other Bars of Jammu province, Transporters and FOI for extending wholehearted support in making the Wednesday Bandh a great success.

In a statement issued to media persons, CCI President Arun Gupta said that the overwhelming support which the Chamber has received from various quarters of the society in the entire Jammu province is the testimony to the fact that stand taken by apex body of traders is hundred percent right and the government should consider the demands henceforth. He categorically said that the motive of the CCI was in no way to oppose the government as far as abrogation of Article 370 is concerned as some sections in the political circles are trying to promulgate but the only reason behind this resentment is the lopsided policies of the J&K Govt.  towards the business community of the region.

The  purpose behind the Bandh by the CCI was to raise the voice of traders of Jammu province as lately the decisions taken by the government especially end to Darbar Move practice, treatment with wine shop owners, abrupt closure of bars, SOP for Banquets, debarring of Mahajans, Khatris, Sikhs and Jains communities from purchasing of agricultural land in J&K, issue of Sand mining, Crushers and brick kiln trade, passenger tax on commercial vehicles, and with current issues of Jammu Bar Association and now the move to invite Reliance stores’ chain in the UT will prove out to be detrimental for the trading community”, he said adding that the response which the CCI has received from all the districts of Jammu including Samba, Poonch, Reasi, Rajouri, Udhampur, Kishtwar and Doda besides Jammu has made it evident that what CCI is professing  the demand of people of Jammu and the government should act fast in the matter and pay heed to demands as soon as possible. The Autocratic attitude of the higher administration not considering to our repeatedly request resulted into the todays silent protest from the business community.

The Jammu Chamber President said that unprecedented support to the Bandh call has emboldened the Chamber to continue with its efforts to ensure justice for the people of Jammu. He expressed gratitude towards all the organizations, political outfits, friendly behavior of the police personnel, the business organization of entire province in particular comprising of wholesalers, retailers, small traders and media fraternity which extended support to the Bandh call.  He assured that CCI will continue to work for ensuring justice to the people especially traders and like the days before abrogation of Article 370, the CCI will continue its endeavours to fight for the genuine cause of the people. ( KINS)