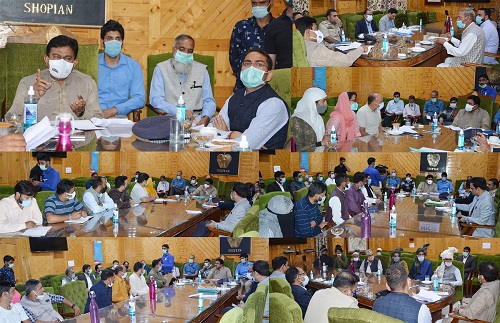 The Minister e-inaugurated several developmental projects during his visit. He also laid e-foundation of Indoor Stadium Keller and Indoor Stadium Zainapora coming up at an estimated cost of Rs 98 lakh and Rs 93 lakh respectively.

The Minister also visited District Hospital Shopian and e-inaugurated Dialysis Unit coming up at an estimated cost of Rs 25.45 lakh and also in-inaugurated the Blood Bank of the hospital. He interacted with health functionaries and also met with the people assembled there.

The Deputy Commissioner briefed the Minister about the developmental activities achieved so for in the district and also threw light on some major developmental issues and initiatives needed to be redressed in future.

The Minister also held a public interaction wherein several delegations called on him and apprised him about various issues being faced by them.

Mishra said that the need of the hour is to inspire youngsters, especially the youth, to utilize their energy in a positive way. He assured every possible support from the government to uplift the district by way of development. He further added that it is matter of joy that District Administration is ahead in developmental activities and is successful in fulfilling the expectations of the people who have really great aspirations with the Administration. He said the Prime Minister’s aim is to serve the nation as a whole in a mission mode, to work together whole heartedly and to bring a big change in making it successful in every sphere of life.

Sharing the vision of the Union Government,  Mishra said that the Centre wants its ministers to assess on-ground situation and take feedback from the public. “The Centre also wants to ensure that the people’s lives are being touched and positive change is brought,” the minister added.

The Union MoS Home also interacted with DDC Members, BDCs, ULBs, PRIs, Civil Society Members ST/SC Members, youth of the district and other political leaders and workers who put forth their demands and issues. He heard them patiently and assured that their genuine demands would be looked into and resolved in a time bound manner.

Anantnag has 450 unregistered schools; future of thousands of students at risk