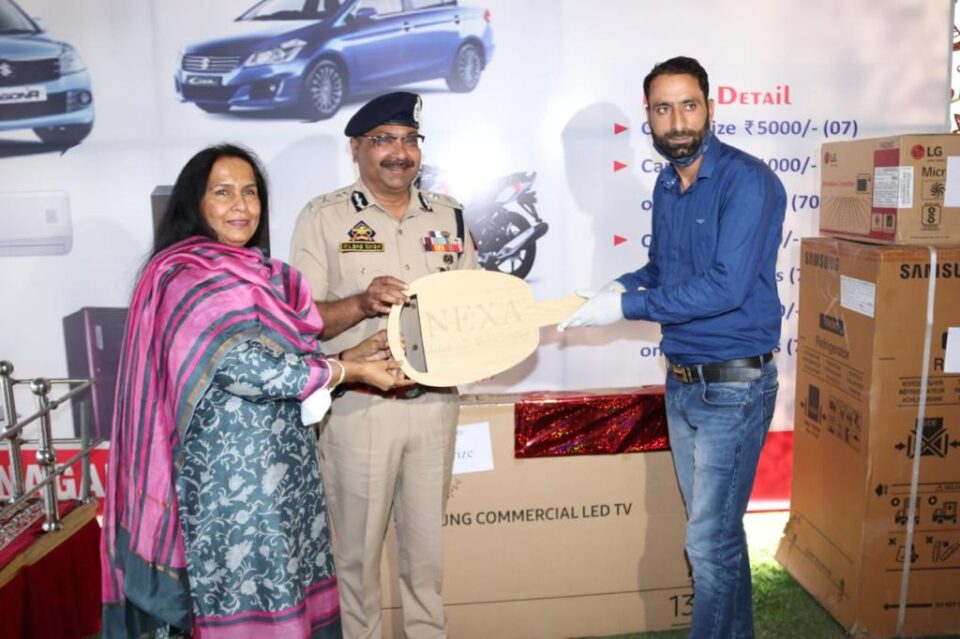 Srinagar 24 September ( KINS): The Prize distribution function of the 32nd Police-Public Mela 2020 for winners of Kashmir zone was held at Police Headquarters here today. The function was presided over by DGP J&K  Dilbag Singh.

Speaking on the occasion the DGP J&K said that under the aegis of PWWA Chairperson and its members the Police Public Mela which once started as a small activity has gained a significant place in terms of healthy relations between J&K Police and public. He said this mela has facilitated better relations between Police and public. He said that every year the mela was organized twice but due to COVID-19 it could not be organized in 2020 in the way that used to be but still we managed to organize raffle draw because tickets were already sold out.

The DGP said that good police public rapport has brought dividends and by involving the people of Jammu and Kashmir in various activities and in youth engagement programmes we have strong bonding. He said that involvement of people especially youth in different sports events at Police station, district, range or zonal levels have helped in maintaining normalcy in J&K. He said that organising Civic Action Programmes and Police Community Partnership Group meetings with the common people has played a very important role in restoring and prevailing peace here. While thanking the people of Jammu Kashmir for their support and cooperation in maintaining peace, the DGP said that he hoped that the support and cooperation will continue in future as well. He said that the current situation in J&K is far better than what it used to be. He said that good atmosphere will benefit the children and youth who have suffered a lot over the past many years. He said that the safety of people of J&K is always our top priority.

Speaking to the media persons the DGP said that in the recent times infiltration attempts have increased from Rajouri, Poonch & Kupwara, Baramulla side and our forces are capable enough to tackle such attempts. He said that cross border infiltration has been a cause of concern but all attempts of pushing terrorists in our side are being foiled. He said every terrorist infiltrated is being neutralized and forces are keeping a watch on such activities.

In his welcome address ADGP Hqrs. PHQ  M K Sinha thanked the DGP J&K, PWWA Chairperson and its members for gracing the function. He informed the gathering that the prize distribution for winners of Jammu province was organized earlier on 24th April 2021 at Jammu and today the prize distribution for winners of Kashmir Province is being held. He congratulated the winners on the occasion

Whatever it is, Kashmiris believe it is happening for sure

Sajjad Lone questions Abdullahs over their meeting with PM

JRL condemns rape incident in Bandipora, terms it as stain on rich culture of Kashmir