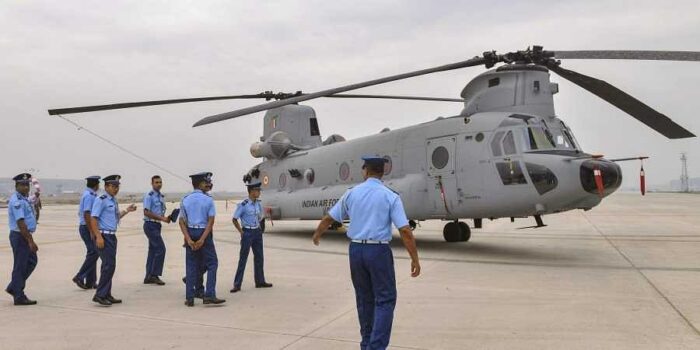 Srinagar , Sep 25 ( KINS) : As the Indian Air Force (IAF) will be holding an air show over the Dal Lake on September 26, Srinagar skies are roaring with the fighter aircraft and their aerobatics exercise, and chinooks helicopters.

“As part of ongoing celebration commemorating ‘Azadi ka Amrit Mahotsav’, Air Force Station Srinagar will conduct an air show at Dal lake in Srinagar on September 26. The event, being organised in collaboration with the J & K Government, will be flagged off by Lieutenant Governor, Manoj Sinha, at Sher-e-Kashmir International Convention Centre,” a government spokesman said.

The display will include flypast by various aircrafts of the IAF. The paramotor flying and IAF’s skydiving team ‘Akash Ganga’ will be in action at the show. Besides, the symphony orchestra of the IAF would be adding to the event.

“Ambassadors of IAF’, Suryakiran Aerobatic Display Team, will be performing in the valley after a gap of 14 years. The event, titled “Give Wings to Your Dreams” would also consist of a photo exhibition at the venue to highlight the history of IAF,” a government spokesman said. ( KINS)

IUST accused of grabbing 66 kanals of Kahcharai in Awantipora campus