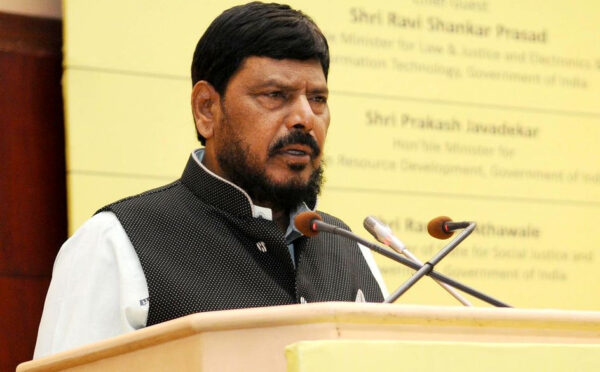 Srinagar , Sep 27 ( KINS): Saying people of J&K will reap benefits of Article 370 abrogation “slowly and silently”, Union Minister of State for Social Justice and Empowerment Ramdas Athawale Monday said the decision was taken by the Centre was in interest of the erstwhile state’s people.

“The abrogation of Article 370 and Article 35A was in the interest of the people of Jammu and Kashmir as it was the biggest hurdle for outside investors to buy land and set up their units in the Union Territory,” he said.

He added: “After the government’s daring move, the people will invest in J&K and generate jobs for local youths who will stay away from the militancy which will soon meet its death”.

He also opposed any dialogue with the Taliban.

He said said there is a need to remove Taliban from power to provide justice to the people of Afghanistan.

Athawale, who is the national president of the Republican Party of India (A), reached Jammu to address his party workers and taking stock of the implementation of the central schemes under his ministry.

He said the BJP-led government had no benefit from the abrogation of Article 370 but for the people of J&K, it has paved the way for large scale development and the people would reap its benefits “slowly and silently” in coming times.

“The government stands with the people of Jammu and Kashmir and is going to help the UT to reach new heights of development,” the minister said.

He added that his ministry would lend all its support to the Lt Governor-led J&K administration to ensure that all the centrally sponsored schemes reach the public.

Asked about National Conference president Farooq Abdullah’s suggestion to the Centre to hold dialogue with the Taliban government in Afghanistan, he said “he (Abdullah) is a respected senior leader of J&K who was also former chief minister and former Union minister but we do not support his statement.”

“Taliban is a terrorist group which has forcibly taken over Afghanistan. I feel it is not good to support them and they should be removed from there as people are facing injustice and human rights violations under their rule,” the minister said.

On AIMIM chief Asaduddin Owaisi reported remark that the political condition of Muslims in Uttar Pradesh is like that of a ‘band party’ at a wedding despite constituting 19 per cent of the state’s population, he said Prime Minister Narendra Modi-led government is taking everyone along under the slogan of ‘Sabka Saath, Sabka Vikas and Sabka Vishwas’ without any discrimination.”

“He (Owaisi) is wrong in saying that Muslims do not have any leader in UP. Yogi Adityanath, who is the chief minister of UP, is there to take care of everyone including Muslims who should not pay heed to the provocative slogans and support the BJP and NDA for the overall welfare of the society,” he said.

Asked about his comment on the reported statement of senior Congress leader Digvijaya Singh that divisive mentality is being taught in schools backed by Rashtriya Swayamsevak Sangh (RSS), Athawale said he is a big leader and a former chief minister but his statement is far from the truth.

“RSS chief Mohan Bhagwat is considering Muslims as their own, while the BJP has Muslim minority morcha’s across the country. We are all Indians and there is no difference among us,” he said.

Responding to another question about some congress leaders drawing a parallel between the Taliban and the BJP, he said such comparisons are completely wrong.

“The centrally sponsored schemes of the BJP-led government are meant for everyone, irrespective of their religion. The BJP government is taking care of the Muslim community which is evident from the statement of UP chief minister that not a single case of the communal riot was reported during his four-and-a-half-year rule.”

He expressed faith in the trade union leader Tanveer Hussain who joined the party recently and said his party which follows the ideology of the Babasaheb (Bhimrao Ramji Ambedkar) would grow under his leadership.

The minister assured all possible help to the daily wagers who are seeking regularisation of their services and labourers in getting jobs. ( KINS)