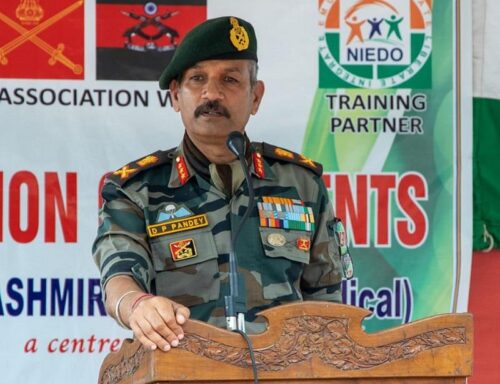 Srinagar, Sept 27 ( KINS) :The Indian Army on Monday said people of Kashmir are happy as they have understood the game played by the separatist leaders in the Valley. Lieutenant General DP Pandey, the General Officer Commanding of the Army’s 15 Corps, known as the Chinar Corps, told the media on the sidelines of a function at Boniyar, Uri in the northern district of Baramulla that the peaceful environment was prevailing across the region.

“People of Kashmir are pretty happy and they’ve understood the game played by the separatists. Hardly anybody is with them. Today, the situation is pretty good,” ANI quoted Lt General Pandey as saying.

Lt General Pandey further said that a little bit of mischief will continue to take place on the LoC and that the army was fully prepared to deal with the same.

“Tourist footfall is increasing and booking at the hotels is good as well. The situation is quite peaceful across the region,” he added.

His remarks came a day after the India Air Force (IAF) conducted an air show – ‘Give Wings to Your Dreams’ – as part of the ongoing celebrations of Azadi Ka Amrit Mahotsav. The event was inaugurated by Lieutenant Governor Manoj Sinha at the Sher-e-Kashmir International Conference Centre (SKICC) overlooking the Dal.

The IAF’s Suryakiran aerobatic display team exhibited their formation flying skills while the Chinook helicopter also demonstrated its capability. This was the first-of-its-kind aerial display conducted by IAF after a gap of 13 years in Srinagar.

The show was organised to encourage young people to enter the aviation sector and also enhance tourism in the Valley. A large number of school and college students attended the show, according to officials.( KINS)

First ceasefire violation on LoC in Tangdhar sector since Feb

No one can stop AIP now: Er Rasheed